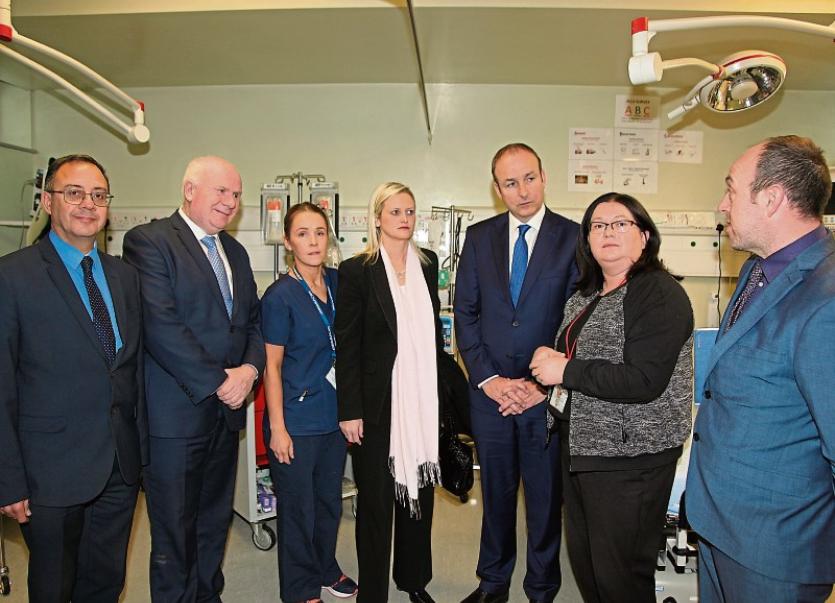 Fianna Fail Leader Micheal Martin has thrown his weight behind a proposal to have South Tipperary General Hospital prioritised for investment by seeking to have it included on the HSE and Department of Health's Capital Plan, but he also admitted that short term measures need to be put in place to deal with overcrowding in the interim.

Speaking to The Tipperary Star on a whirlwind visit to the Tipperary constituency this week, Deputy Martin backed his party colleague Deputy Jackie Cahill in his assessment that little has been done to alleviate problems in the past and going on evidence, little else will be done in South Tipperary General in the immediate future.

"Hospital and mental health are key issues. Severe over crowding and staff under extraordainry pressure -something immediate needs to happen. South Tipp General merits urgent attention of all the hospitals in the region and I have made that case to the Minister and the upper echelons of the HSE.

"Something has to happen to alleviate the wating lists. James Reilly and Leo Varadker combined, had disasterous reigns in terms of understanding the challenges. They got rid of the treatment purchase fund and things went from bad to worse," he said.

Asked about the proposal to utilise the empty Our Lady's facility in Cashel, Deputy Martin added, "There has to be additional capacity in the hopsital itself and whether that is through modular buildings which are high quality and safe, then that should be prioritised. But, in terms of Cashel, depending on the quality of conditions, any capacity in the system should be utilised to ease the pressure in Clonmel. Having people in A&E departments for the long haul is damaging to their health. This has to be tackled with urgency," he said.

The party leader went on to claim that in the nursing profession, pressure is so high that people are leaving.

"I know from travelling around the country that theatre nurses are in high demand. Doctors, nurses and care staff want to do a good job, they want to feel that they are making a difference and it upsets them when they see that this is not happening through no fault of their own," he said, adding that a recent recruitment drive netted just 80 positions for the 2,000 advertised.

Deputy Jackie Cahill referred to Health Minister Simon Harris' much publicised visit to Clonmel and Cashel in October. "He saw Cashel with two floors lying idle. He promised extra home help hours to try and ease the situation but when you see the figure it is only marginally up," he said.

And, Deputy Cahill cautioned that the concept of the mooted modular hotel in Clonmel could actually cause the required investment to be sidelined.

"To me the modular hotel could get in the way of capital investment in Clonmel. Cashel is the readymade solution while we are waiting for significant investment for Clonmel. Even if it started in the morning you could be waiting for five - seven years for Clonmel to be completed, so I think Cashel is the readymade solution. We have a severe lack of acute beds in the county and I can't understand the resistence of some people to promote Cashel as the solution. It wouldn't be the ideal solution because surgeons and consultants would be trying to operate from two hospitals, but it's far better to have two hospitals than all those people on trolleys.

"We have done nothing to remedy the crisis we had last winter and I am worried that we are having the same again now. Minister Harris came down here and promised the sun, moon and stars the day he was here, but we have had nothing since," he said.

As Minister for Health back in the Fianna Fail government of 2003-2004, Micheal Martin was the last Minister to sanction capital investment in South Tipperary General Hospital. Back then though, there was an A&E in Nenagh General Hospital and Our Lady's was still operational too. A lot has changed since - Nenagh was downgraded; Cashel closed; but South Tipperary General is expected to operate with the same facilities but with far greater numbers to cater for.