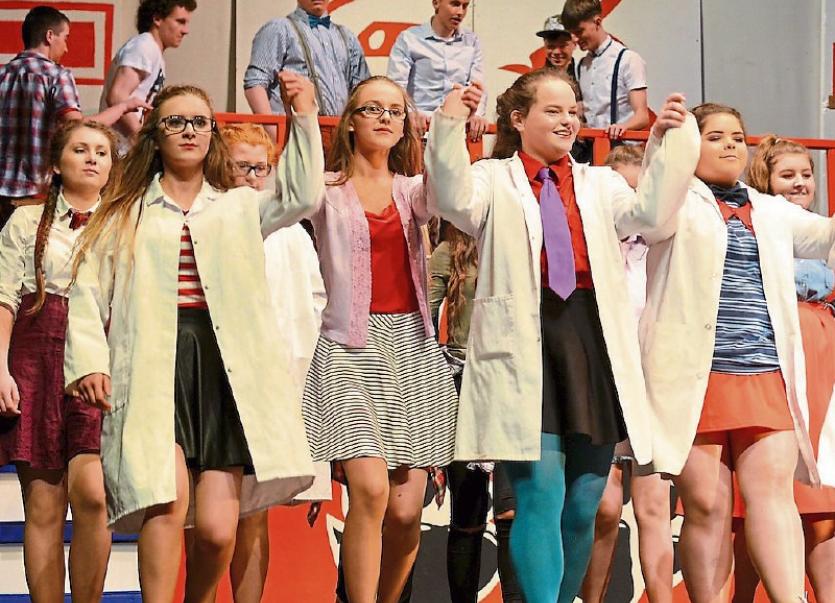 “The quality of singing, dancing and acting were a joy to behold and the standard was incredible when one considers that this was a first stage performance for most of the students involved,” said Ms. Niamh Ryan from St. Anne’s.

The story of High School Musical is well known to all teenagers and was a very popular choice of show among the cast.

There were excellent performances in this production. Clíona Reardon sang beautifully in the part of Gabriella and Luke Gibson was a very convincing Troy. Katie Cunningham thrilled audiences with her superb acting; singing and movement on stage and James Cussen gave an excellent performance in the role of Ryan. Also highly commended are cast members: Seán Smith as Chad, Leonie Keating who played Taylor, Martha by Serena Kinane, James Cunningham as Zeke and Martha Lewendowska as Ms Darbus. Philip Crowe was a very convincing Coach Bolton whilst Oisín Kelly played Jack Scott, Úna Carew played the piano-playing Kelsie and Raymond Hennessy played the Moderator/Mr. Tenny.

The chorus backed up the lead cast members beautifully with entertaining performances and precise choreography.

Ms. Colette Treacy, Principal St. Anne’s was very pleased with the show. “Both schools were very proud of their students’ performances. The school musical empowers our students to take extra responsibilities and to explore and discover new and often hidden talents.”

Mr. John Kiely, Principal of the Abbey CBS added, “It is not only the students who appear on stage that get the opportunity to excel; back stage leaders emerge during set construction, back stage management and other aspects of the production.”

Michael O’Donoghue and Clare Murray directed the show. “Mr. Michael O’Donoghue produced the entire show with his usual flare and successfully got the best out of all students involved,” said Niamh Ryan, St. Anne’s. “The Musical directors Pat Marnane and Fran Garry Marnane also got the best from the cast musically and also provided wonderful accompaniment for the performances with Colm Hanrahan on percussion.”