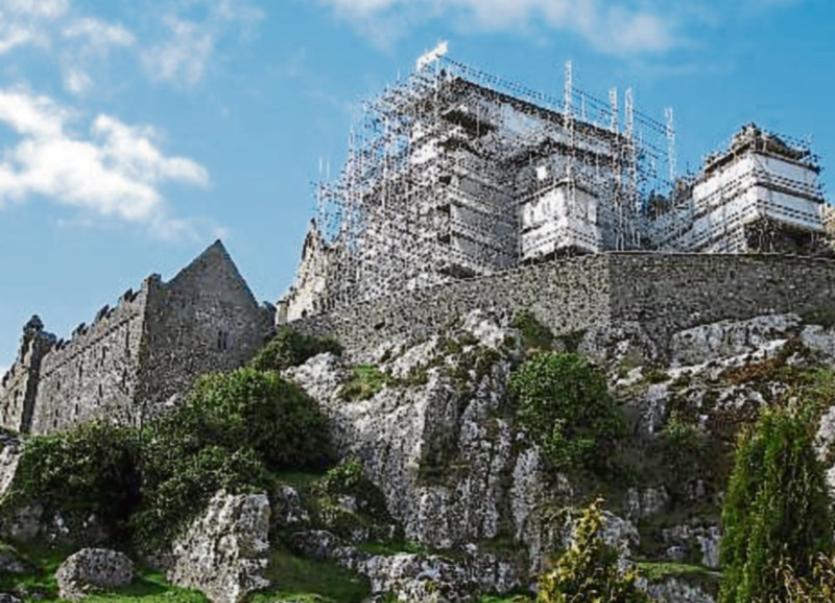 The Rock of Cashel

A 17th century limestone Armorial Plaque affixed to the upper front wall of Feehan's public house at 104/105 Main Street, Cashel, is a cause of much curiosity since the premises was recently renovated and costomers now have assess to the projecting flat roof over the ground floor level.

In recent months local Councillor and historian Tom Wood has carried out some research into the plaque that commemorates Archbishop of Cashel, Thomas Walsh, 1626-1654.

Born in Waterford in 1580, Thomas Walsh was educated in Lisbon by the Jesuits before moving to the Irish College in Salamanca, Spain, where he was ordained for the priesthood in 1603. He returned to Ireland and served in his native Waterford for about twenty years. In 1626 he was Consecrated in Rome and was appointed Archbishop of Cashel in succession to Archbishop David Kearney as he had died in exile the previous year in France. David was one of the Cashel Kearneys who played a significant role in the Catholic Church and resided in Kearneys Castle coincidentially just metres removed from Feehans bar and restaurant where the Walsh Armorial Plaque stands.

With great unrest witnessed in Ireland during most of the 17th century many religious were forced into hiding, were banished, escaped overseas or went to study in the Irish Colleges set up around Europe, especially in Spain and France. Archbishop Thomas Walsh was no exception and after his capture and deportation in 1650 he took up residence in the Irish College at Santiago where he eventually died on Wednesday 6th May 1654 aged 74 years.

With hundreds of Irish people, including many from Cashel and County Tipperary, taking up the challenge of walking the Camino Pilgrimage to Santiago de Compostela, Tom Wood believes that having the remains of the illustrious Catholic Archbishop of Cashel resting in that same beautifually carved early 13th century Cathedral in company with the remains of Saint James, makes the pilgrimage even extra special.

Cashel and Boherclough man Michael Wardick loves the challenge of the Camino de Santiago Pilgrimage route and recently returned from his nineth venture having covered hundreds of kilometers to reach his destination, Santiago in Galicia, north western Spain. With a few scraps of information relating to Archbishop Walsh and a curiosity to find out as much as possible he met some archivists and gleaned an exciting insight into the Archbishop and the Irish College in Santiago.

He intends uncovering more information and is hoping to locate the precise resting place of the prelate within the Cathedral on his next visit. Meanwhile, Tom Wood believes that Feehans three storey premises may have been built on the site of a medieval market place during the mid 17th century and re-modelled around 1880.

While mystery surrounds why the plaque is on the particular building an Archaeological Survey carried out in Cashel in 1993 suggests it may relate to an ecclesiastical college funded in Cashel by Archbishop Walsh.