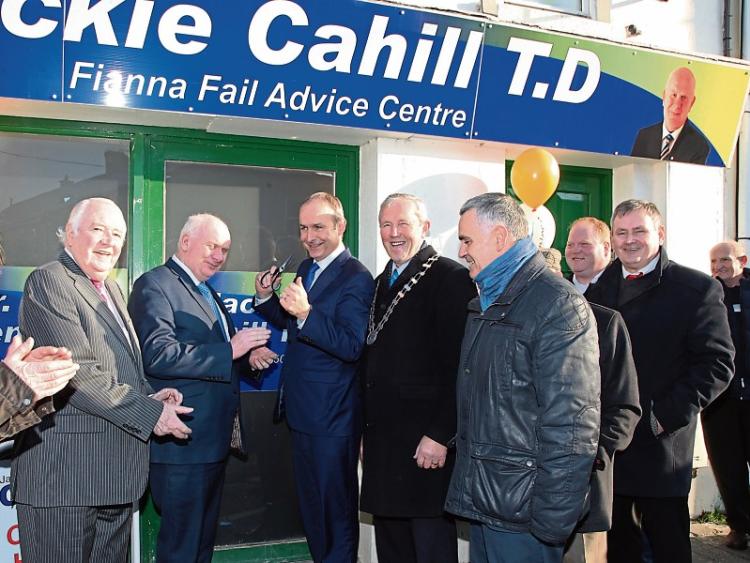 Fianna Fail party leader Micheal Martin says the priority for the party in Tipperary must be to win a second seat in the next General Election.

Fianna Fail Leader Micheal Martin has thrown down a real challenge to Deputy Jackie Cahill and the party faithful in Tipperary - secure a second FF seat in the next General Election.

On a whirlwind visit to The Premier County to open constituency offices in Carrick-on-Suir, Tipperary, Clonmel and Cahir, Deputy Martin made no secret of the fact that his party is zoning in on a seat from the former South Tipperary constituency and admits that the party is 'on the mend' after a number of high profile, pre and post, election fallouts amongst members.

"Part of our being rooted in the community is opening offices so that we can hear of the issues which are of most concern to the people of Tipperary. I think we are on the mend. There will always be challenges in a political party, particularly one which is growing and developing. Jackie has brought great energy to the party in Tipp as evidence from the offices he is opening. He is very pro-active with people.

"Jackie had incredibe numbers in his campaign and to be fair Michael Smith and Siobhan Ambrose too, they ran great campaigns. I think we turned a corner in the General Election in Tipperary.

“Prior to that we didn't have a TD - we now have a TD with purpose and with clear policies and priorities. Jackie is making his presence felt policy wise within the party and also in the constituency. He is very anxious that we now go out and see if we can win two seats in the next General Election.

“So, there is an agenda of growth and development,"he said mentioning the return to the fold of Carrick-on-Suir Cllr Ciaran Burke, while Jackie Kenehan in Tipperary town and Sandra Molloy in Nenagh have also joined the party.

However, Deputy Martin does not see former Minister Mary Hanafin running in Tipperary and said that it is not on the agenda.

" No I don't think so. I get no sense from her that that is on her agenda. The Hanafin name is extremely strong in Tipperary but that is not on the agenda in Tipperary at all. Somebody rooted in the constituency is key for us," he said.

It would appear that the current Mayor of Tipperary, Cllr Siobhan Ambrose is the front runner to carry the Fianna Fail banner in the next General Election, ticking many of the boxes required including geography and gender.

"South Tipp is a key area for us because it was one of our strongest areas historically. It will be challenging and we are under no illusions about that because it is a fragmented political system. We are not losing the run of ourselves because we have to win back our seat first and we have a very energetic TD who is very committed. But, we do want to get on with the renewal of the party and the next logical step would be to challenge for a second seat in the next General Election. Obviously from a geographical perspective having a strong presence in South Tipperary would be very important," Deputy Martin said.