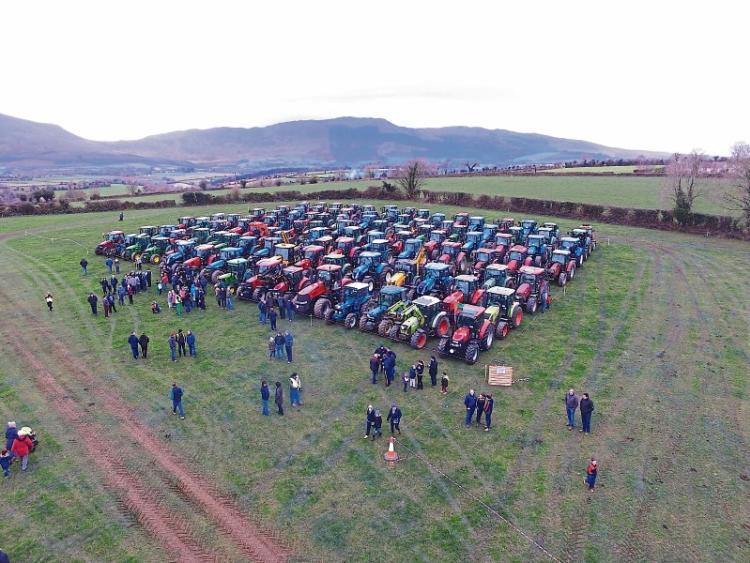 Carrick-on-Suir was briefly invaded by a fleet of 179 tractors on Sunday afternoon.

The massive train of agricultural vehicles of all sizes and makes that passed through Carrickbeg as locals were enjoying their Sunday lunch, were taking part in one of the biggest charity tractor runs ever seen in the Carrick-on-Suir area.

The convoy of tractors, ranging from John Deeres, New Hollands and Massey Fergusons to Fendts, Claas and vintage models, left Rathgormack village around 12.30pm and travelled to neighbouring Clonea and onto the gates of Curraghmore Estate before heading to Crehana and Carrickbeg and back to Rathgormack via the Coolnamuck Road and Millvale.

The event was organised by a committee led by Raymond Connolly, one of three candidates running in the Mayor of the Comeraghs fundraising competition in aid of the proposed Rathgormack & Clonea Multi-Use Games area.

Raymond, along with Tony Bolger and Ryan Roche, are vying to win the “Mayor of the Comeraghs” title by raising the most amount of money for the community sports facility earmarked for the site beside Rathgormack Community & Hiking Centre.

The tractor run has got Raymond's fundraising campaign off to a flying start with each tractor owner contributing €20 to take part.

He said the tractor run attracted participants from all over Rathgormack, Clonea and the Carrick area as well as from as far as Clerihan, Clonmel, Dunhill, Kill, Stradbally, Lemybrien and Kilrossanty.

He was thrilled with the huge turnout and support the tractor run received from the local community and pointed out that many of the tractor drivers contributed more than the €20 entry fee and they received a lot of donations from the community on the day.

"It was an absolutely fantastic day and I am delighted everything went well," he told The Nationalist.

Raymond paid tribute to his committee who helped organise the event over the past month, the team of 50 stewards, who manned the route, and volunteers, who provided refreshments to the tractor drivers at Rathgormack Community Centre at the end of the run.

The Raymond Connolly Mayor of the Comeraghs campaign will also host a Christmas Bazaar in Rathgormack Community & Hiking Centre this Sunday, December 11 from 2pm to 5pm with a visit from Santa promised.

Meanwhile, Tony Bolger begins his mayoral fundraising campaign on Sunday evening with a Christmas concert in Clonea Church starting at 7pm. It will feature performances from Voice of Ireland contestant Moylan Brunnock, Clonea/Rathgormack Parish Choir, the choirs of Rathgormack and Clonea national schools and young musicians from Ceol Craobh Crotaigh.

And Ryan Roche will literally kick off his campaign for mayor on St Stephen's Day by hosting a mixed football/soccer match in Rathgormack GAA Field between Rathgormack GAA Club's male footballers and Comeragh Rangers Ladies footballers. Throw-in will be at 11.30am.