Congratulations to Sheila and Frank Nolan 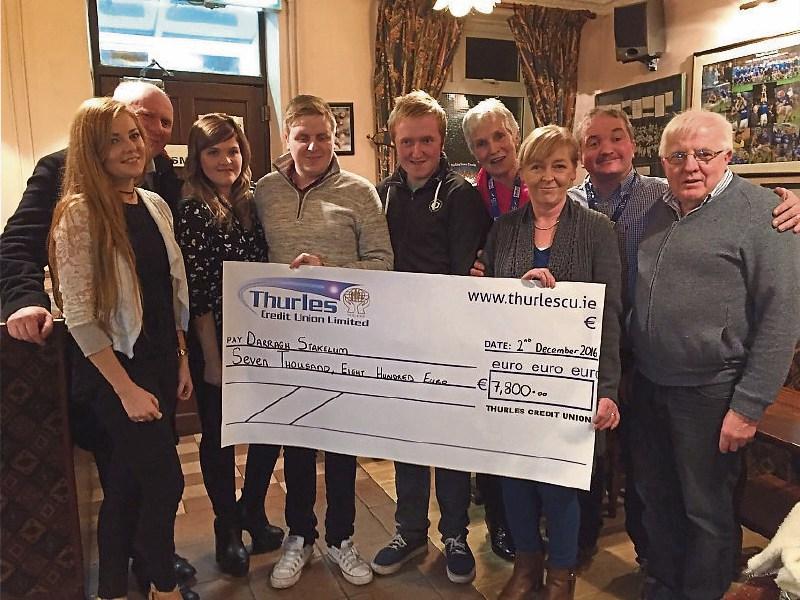 Huge congratulations are due to Sheila and Frank Nolan, Leugh, Thurles for their tremendous efforts in rasing €15,600 for the National Council for the Blind of Ireland and local man Darragh Stakelum who lost his sight recently.

Sheila and Frank completed the Dublin City marathon having trained dilligently for many weeks beforehand and they were very determined to raise as much funds as possible for these two very worthwhile causes.

However, what they achieved was beyond their wildest dreams and they have expressed huge appreciation to all who have supported with this undertaking.

“We have been just blown away by the level of support for this and we want to thank everybody who contributed in any way at all. It was tremendous to see the amount of goodwill out there and everyone was just so positive about the whole thing,” Frank Nolan told The Tipperary Star this week.

The cheques were handed over last week in the Thurles Safsields GAA Clubhouse and there was a great atmosphere of appreciation and thanks on the part of the two recipient groups who attended.

Special thanks is expressed to Thurles Sarsfields, everybody who supported cake sale/raffle, everyone who donated confectionary, raffle prizes, and hampers on the day of cake sale. To local businesses who displayed sponsorship cards, The Tipperary Star for the advertisement, Thurles Parish Newsletter, individuals who collected own sponsorship and Leugh N.S. who donated money from the fancy dress up day for Halloween.

“The support we received was overwhelming and we are indebted to everyone for supporting us on the marathon journey and who wished us well. A big thank you to our families, neighbours and friends who were so supportive,”Sheila said this week.

There was also a great turnout of support for Frank and Sheila in Dublin as they completed the marathon and that was greatly appreciated.