Remember your loved ones this Christmas and support South Tipperary Hospice 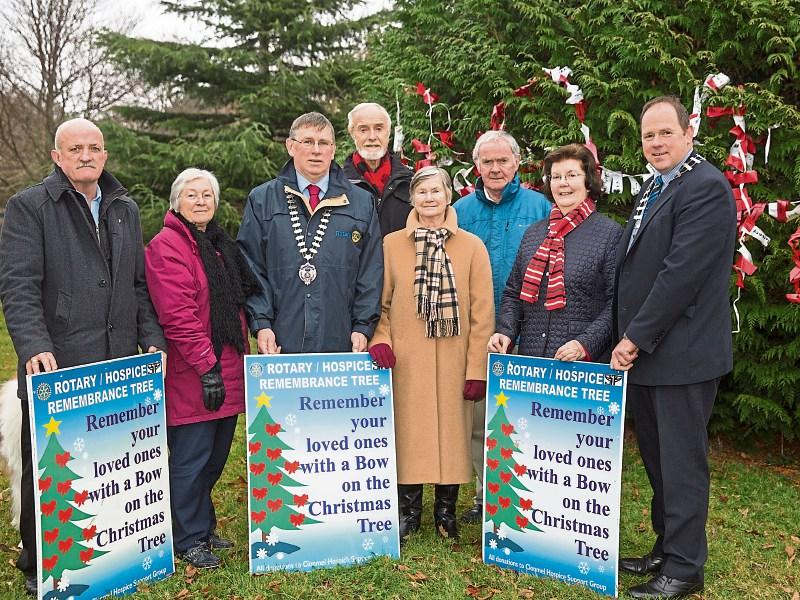 Christmas shoppers in Clonmel are being urged to take a few minutes during the seasonal rush to think of their loved ones who have passed away, and at the same time help fundraise for South Tipperary Hospice.

The hospice homecare nursing service is one of the most deserving charities in the county, doing wonderful work each year to alleviate the suffering of those who are seriously ill, and to help their families cope with it.

The people of the county have always given the hospice great support in their efforts, particularly in raising funds to provide home-care nurses.

And it’s hoped that this Christmas, there will again be a strong response to the annual Remembrance Tree campaign, organised by the Rotary Club of Clonmel to raise funds for hospice.

This year there will be three trees - one at Dunnes Stores, Davis Road; in O’Connell Street outside Connolly’s Menswear which will be staffed by Rotary members, Hospice members and Volunteers between 18th and 23rd December; and one at Tesco which will also be staffed between 19th and 21st December.

Members of the public can come to the tree and write the names of those they want to commemorate on a ribbon, which is then attached to the tree.

They can also make a donation to the Hospice in memory of their loved one.

Peter O’Donnell, President of the Rotary Club of Clonmel, said the Remembrance Tree project was a fantastic way for people to remember their loved ones at Christmas, and it was wonderful that the funds raised were all spent locally.

“There is no more deserving charity than hospice. Every family is affected by serious illness at some stage,” he said.

After Christmas, the ribbons will be brought to Mass in S.S. Peter and Paul’s Church, Clonmel, on Sunday, January 1st, at 11am, where all the people whose names are written on them will be prayed for.

All the funds raised will go to South Tipperary Hospice, who need to raise hundreds of thousands of euro each year for their much-needed work.

Both the Hospice and the Rotary Club of Clonmel are deeply grateful for the kind donations made during the Remembrance Tree campaign in the past, and are hoping for a generous response again this year.