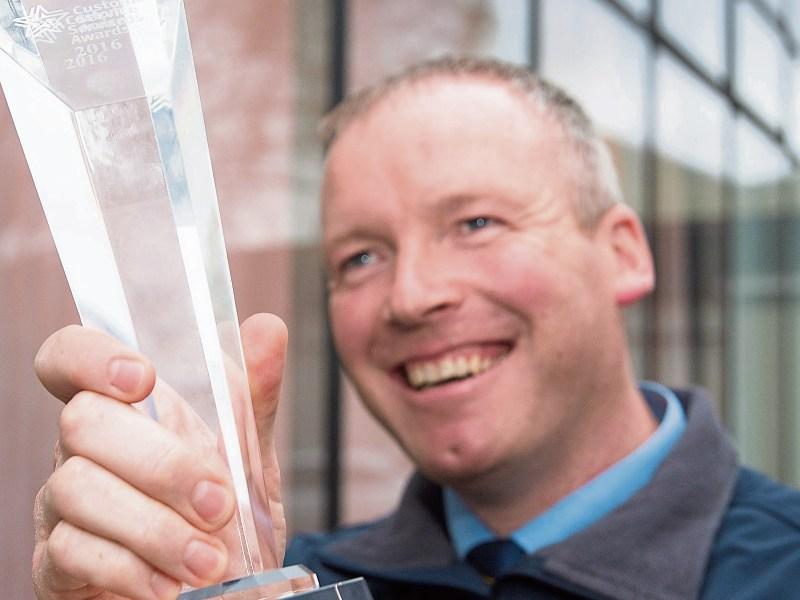 Declan Ryan, station controller2 at Limerick Junction, was honoured by Iarnrod Eireann for the way he dealt with a distressing incident when a passenger became ill on a train and later died.

Iarnród Éireann’s Customer Service Award winners for 2016 were announced at a ceremony in Dublin with Declan Ryan the Overall winner.

The Iarnród Éireann Customer service awards are now in their sixth year and are designed to acknowledge those across a range of roles who have excelled in customer service.

A total of 215 colleagues were nominated for this year’s awards.

Overall winner Declan Ryan, Limerick Junction Station, was nominated for a professionalism in customer service delivery daily, highlighted by the calm and compassionate manner in which he helped customers during a stressful and upsetting incident.

On 20th September last, Declan was alerted to an extremely ill passenger on board a special train from the National Ploughing Championships.

In his care for the gentleman, who sadly passed away, and his assistance and concern for others on board, he represented the very best in customer service.

Declan’s nomination said: “He was remarkable, calm and controlled in the situation, and provided a very caring service.”

His nominations refer to “the way he responded to the incident”, “he took charge of the situation with onlookers”, he assisted other passengers away from the incident and shielded onlookers by placing shutters on the coach so the paramedics could work.

Iarnród Éireann Chief Executive David Franks said - “Declan represents the quality of service to our customers to which we all aspire, and gave leadership to the team in Limerick Junction in responding to an upsetting and stressful incident.

" I congratulate him for winning the overall award from over 200 nominees.”