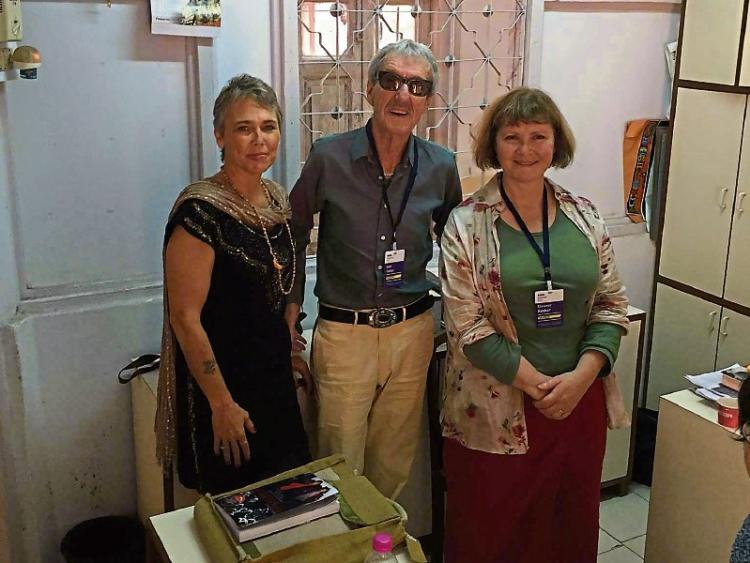 The invitation to participate in the festival came from Maureen Kennelly, director of Poetry Ireland, and was supported by Culture Ireland as part of the Ireland 2016 Centenary Programme, and Anil Dharker, director of Mumbai International Literary Festival.

Eleanor said the theatre was full and she was a “little nervous”, but Keki Daruwalla was particularly kind and put her at her ease.

In addition to her scheduled programmed events, Ms Hooker was invited to participate in two others.

Reena Agrawal, a member of the festival team and a lecturer in Sociology to Mass Media students in Mumbai, invited her and three other festival participants to an event entitled, Tea with the Authors. The writers gave a talk on writing and their own creative processes, to the winners of the festival writing contests, who had travelled from all over India for the event.

Mrs Agrawal invited Ms Hooker and Angelica Freitas, to give and a talk and reading to students at Sophia College, a womans’ university in the city, where, said Eleanor, the staff and students were “welcoming and attentive and had lots of questions”.

Sam Cutler, author and former tour manager for the the Rolling Stones and co-manager of The Grateful Dead, and his wife, Jackie, gave a talk following Eleanor's and sat in on our session.

She described her participation at the festival as one of the “most enriching experiences of my creative life”.