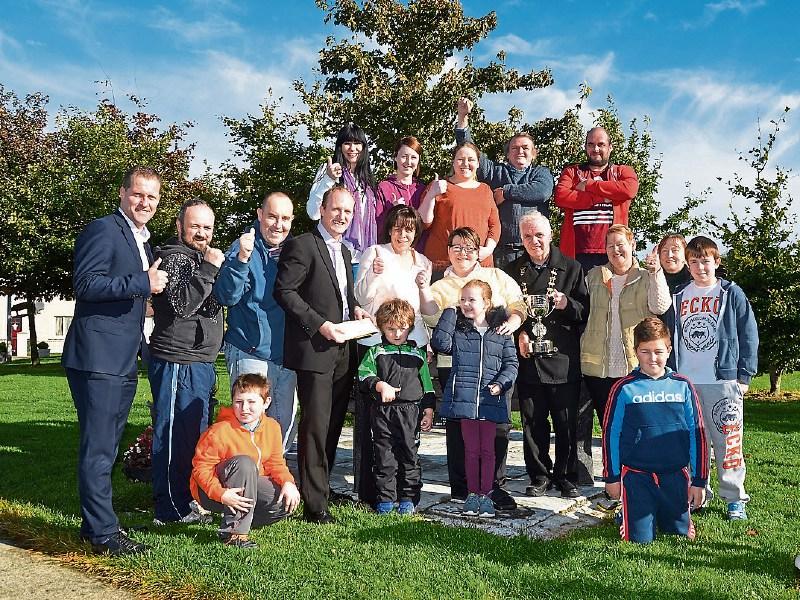 The presentation of the much anticipated 2016 Roscrea Enhancement Awards took place over the last number of weeks.

In a change to last year’s awards ceremony, this year, members of the Enhancement Committee travelled to each of the award recipients to present their individual awards.

Speaking this week, the Chairman of The Enhancement Committee, Brian King congratulated all the winners and in particular he acknowledged the overall winner Ard Ross.

Brian said that the awards would not be possible without the support of local sponsors and in that regard he was keen to thank his own employers Roscrea Credit Union and it’s Chairman Sean Hogan, Super Valu Roscrea and it’s proprietors Brian and Bernie Colclough, Roscrea Chamber Of Commerce and it’s President Seamus Browne, Tesco Roscrea and Monica Kerins, Milltown Garden Centre and Paul Davy, Roscrea Tidy Towns and its committee members and Chairman Denis Ryan and Tipperary County Council.

The overall winner of the 2016 Roscrea Enhancement Awards was Ard Ross who deserve great credit and great praise for their endeavours over the past year in particular. Caroline Creamer and her committee had achieved so much this year in such a short period of time. Caroline said that being able to receive the award on the very site of their best project this year will make the memory of getting the award even extra special.

This week Trudi O’Leary the Proprietor of Roscrea Travel said that both herself and her staff were thrilled to receive the Roscrea Enhancement Award for the best-presented premises. Trudi said it was a wonderful opportunity to meet members of the Enhancement Committee and members of the sponsors of the award, Roscrea Chamber Of Commerce, and show them around the recently purchased and refurbished building. Chamber President Seamus Browne said that both he and Brian often make the argument at Chamber meetings that it is vital for future investment in the town that we deal with the challenges presented in-house as best we can while projecting the town publically in the best possible light for future investment.

The “Most Innovative Project Award” this year was presented to Ashbury Residents Association. The project focused upon a 1916 bench and garden which was officially launched in late November.

The “Best Green Area In A State Award” was presented to last year’s overall winner of the Enhancement Award, Gleann Glas. James Byrne accepted the prize on behalf of the committee. James, who took the opportunity to give members of the Enhancement Committee a tour Teach Na Gréine, said that this is an example of the opportunity presented by the new format, for estates to really demonstrate to the wider community the great work that they do which might not necessarily be widely known.

The most “Valuable Voluntary Contribution” this year went to Roscrea Men's Shed. Neil Guerin the Chairman of the Men's Shed thanked Brian and the Enhancement Committee for their award and thanked the sponsors of the award Roscrea Tidy Towns for their support. Denis Ryan the Chairman of Roscrea Tidy Towns said that the men's shed now contribute very significantly each year to the overall work plan of the Tidy Towns.

Two new awards this year included the “Best Building Renovation Award” which was sponsored by Tipperary County Council and was won by the Villa Marie Nursing Home.

Commenting on the awards Brian King said he would encourage the committee to consider an even simpler way for community groups to engage with the awards.

Brian said that both Marion Carey and Cllr Michael Smith care very deeply about Roscrea and the Enhancement Plan and that the great work and support they give to helping with the organisation of the Enhancement Awards deserves to be recognised as does the effort of all the Roscrea Enhancement Committee members.

With regard to the Enhancement Plan itself, Brian said that he would love to accelerate the development of the plan immediately. The signage strategy for Roscrea has taken up considerable time this year. Numerous workshops and consultations took place and it is expected to have a plan in place in early 2017.