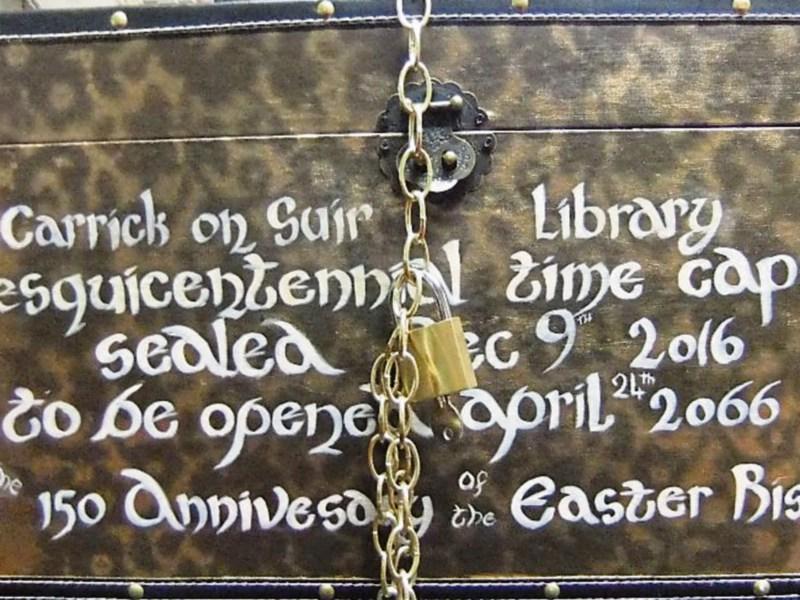 More than 130 students from five primary schools gathered at Carrick-on-Suir Library to fill a time capsule that will be opened in 50 years time.

It was the Library's final event of the year to commemorate the 100th anniversary of the 1916 Rising.

Students from Ballyneale NS, CBS Green School,Carrick-on-Suir; Gaelscoil Carraig na Siúire, Newtown Upper NS and the Presentation Primary School, Carrick-on-Suir all contributed to the time capsule and were at the Library on Friday, December 9 to witness it being sealed by Anne Marie Magorrian, a relative of one of the key women involved in the 1916 Rising.

Letters from 6th class students about their hopes and dream for the future and memorabilia relating to the students' schools and lives were placed in the steel casket, which will be erected on one of the Library's walls in the New Year.

A battery powered radio, pencils and other school stationery, a sliothar, mobile phone and school uniform were among the memorabilia the students contributed to the time capsule. The capsule is to be opened on April 24, 2016, the 150th anniversary of the 1916 Rising.

The children prepared special tributes to mark the 1916 Centenary at the time capsule sealing ceremony with music, singing, a poetry recital and a re-enactment play.

Photographer and Carrick-on-Suir correspondent with The Nationalist Anne Marie Magorrian, who sealed the time capsule, is a great grand niece of Sarah Carney (née Cassidy), the mother of Winifred Carney, socialist, suffragette, trade unionist, secretary and confidant of James Connolly. Winifred was the first woman to enter the GPO with him armed with a Webley revolver and typewriter and was one of the last to leave with the injured Connolly. During the ceremony, Green School students sang "Dying Rebel" and "Kevin Barry", accompanied by teacher Deirdre Walsh on accordion. Presentation girls sang "Grace" and were joined by singers and guitarists from Ballyneale NS for the last two verses. Ballynealepupils did a drama re-enactment of the Rising, directed by Mary O’Hanlon. And Gaelscoil students concluded the ceremony by singing Amhran na Bhfiann.