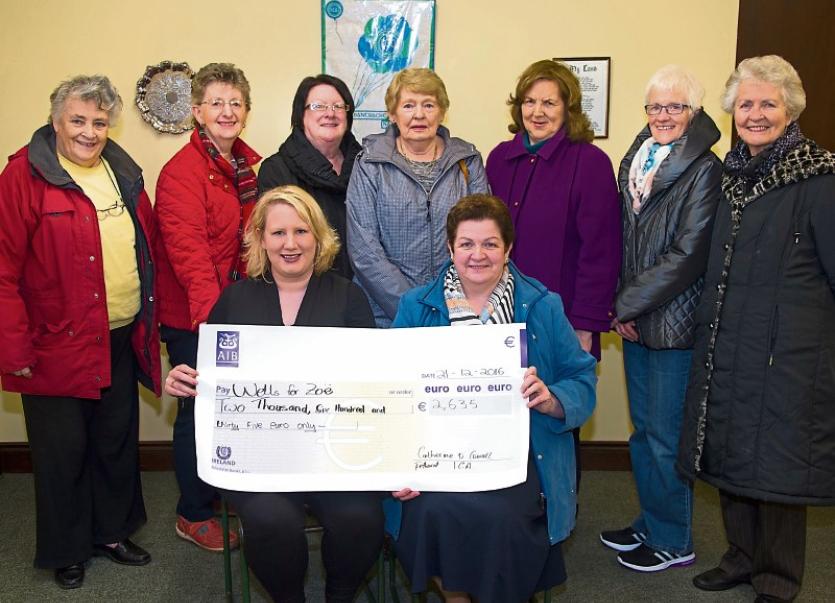 Fethard ICA presented a cheque to Jacquie Ryan, in aid of the Wells for Zoë project in Malawi.

The cheque was presented in the Fethard ICA Hall on December 21, proceeds of the recent Craft Fair and Cake Sale which took place in the hall on Sunday, December 4, where the sales of Christmas crafts and cakes raised a staggering €2,635 which will go towards helping many communities in Malawi.

Wells for Zoë was established in 2005 by Mary and John Coyne from Dublin, and since its formation has helped provide over 500,000 people in Northern Malawi with clean water while also running projects in sustainable farming and educating the ‘girl child’. The charity is voluntary, with all members paying their own flights, accommodation and expenses.

On behalf of Wells for Zoë (www.wellsforzoe.org) we would like to thank the Fethard ICA and everyone who took part in the event from those who baked cakes, donated crafts to those who called in, had a cup of tea and a chat. There was a real Christmas spirit in the hall, and the funds raised will make a huge difference to another rural community in Malawi.

As it is the ‘woman’s job’ to carry the water we often find ourselves working with women’s groups in Malawi. The money raised by Fethard ICA will go to such a group in a village called Lupaso on the outskirts of Mzuzu, the capital city of the north. The funds will help roof the pre-school/community centre, and install water pump, providing the community with clean water and reduce the incidents of Malaria and Cholera. Currently the women are taking water from a river some distance away, this river runs along the outskirts of the city and the water can easily be contaminated with sewage and chemicals. The women from the village will be thought how to maintain the well. We will organise teaching workshops for the women so they can get full potential out of the preschool. The building will also be used as a centre for the women to meet, and allow their women’s group maintain relations with the Fethard ICA.

Jacquie Ryan from Knockbritt, Fethard, is travelling to Malawi in January for the year, while she will keep the ladies in Fethard ICA updated on the progress s in Lupaso.