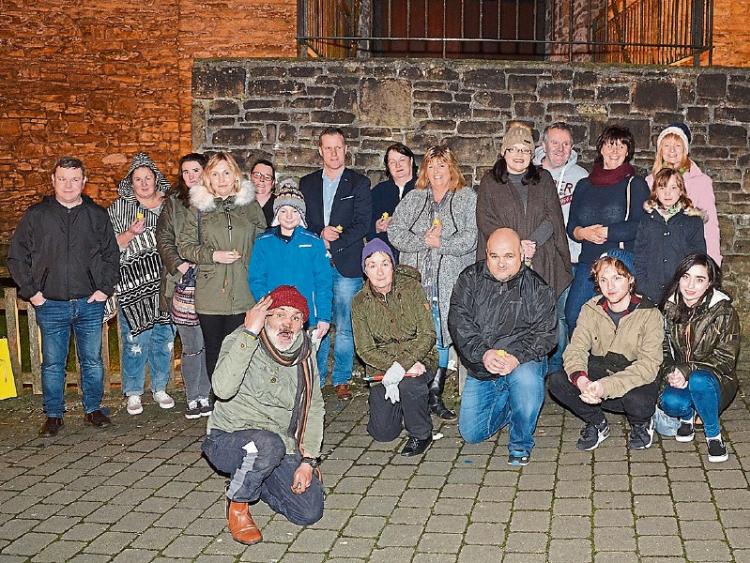 On New Years Eve at 7pm a Candlelit vigil was held in Roscrea for all those lost to suicide.

Organised by Mike Edwards and open to all it was a chance for those affected by the tragedy of suicide to remember their family and friends in a quiet and thoughtful setting.

Local musicians Jack Keeshan and Lauren Murphy performed for the gathered crowd with Lauren singing her own composition.

Tanya Devitto McMahon and Mary McLoughlin of the Semi Colon project in Nenagh along other members of the Barbers Edge in Nenagh joined with locals in lighting candles in memory of those lost in 2016.

Mike Edwards then addressed those present.

Mike spoke about the supports available in Roscrea mentioning the Roscrea Men’s Shed, Women’s shed, The Kick Back Café and Pieta House, saying that all provide a place to go and talk and or just enjoy the company of others and not feel alone. Mike went an to explain the idea that it’s ok to not feel ok, saying that the Men’s Shed was open Tuesday, Wednesday and Thursdays to all, Mike then invited those present to support the Semi Colons fundraiser at the Barbers Edge in Nenagh on 15th of January were a local tattooist would tattoo the semi Colon for a donation of €20 giving people a visible sign that their “story is not finished”, with proceeds share between the Semi Colon Projects and Nenagh Ormand Search Unit and Pieta House. In closing Mike thanked those gathered for attending saying “it’s ok to not feel ok” and iit’s ok to talk.