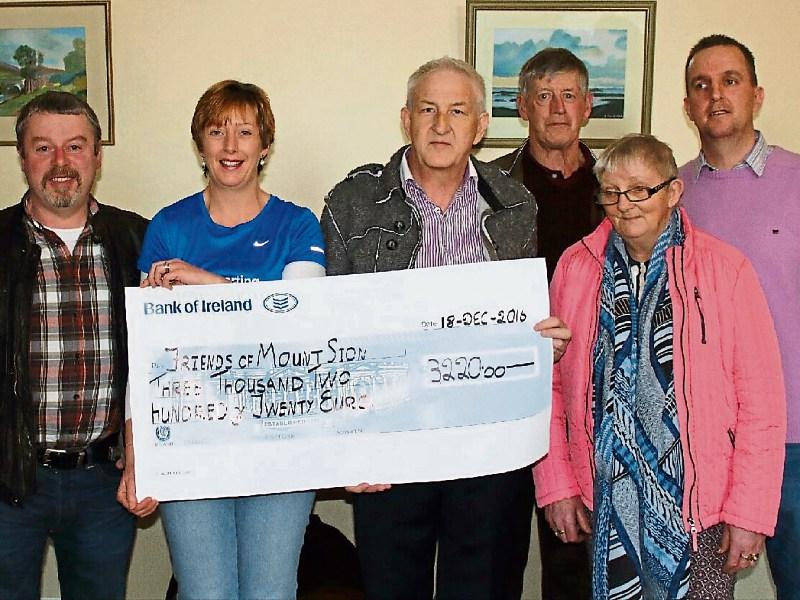 Nicola Fahey Ryan from Annacarty was delighted to make a cheque presentation to the Friends of Mount Sion, Tipperary town for €3220.

Nicola decided to raise funds for the Friends of Mount Sion as her mother Nuala Fahey, uses the respite centre at Mount Sion. First she ran the Dublin City marathon in October and completed the 26.2 miles Dublin City Marathon in 5 hours and she also held a coffee morning in the Bank of Ireland.

“I would like to thank all those who sponsored me and supported our coffee morning,” said Nicola. “l was delighted to have raised this amount of money for the Friends of Mount Sion and it was great fun too.”

In 2012 Nicola ran a mini-marathon to raise money for the Irish Sudden Infant Death charity in memory of her brother who died 30 years ago and in 2014 she did a parachute jump in aid of Diabetes Ireland for her sister who passed away in 2006 from the disease.

The Mount Sion residential facility in Tipperary Town was established in 1997, providing medium to long term accommodation and 24-hour nursing support its health service users. There are now eight long term residents at Mount Sion some of whom have been living there for 15 years.