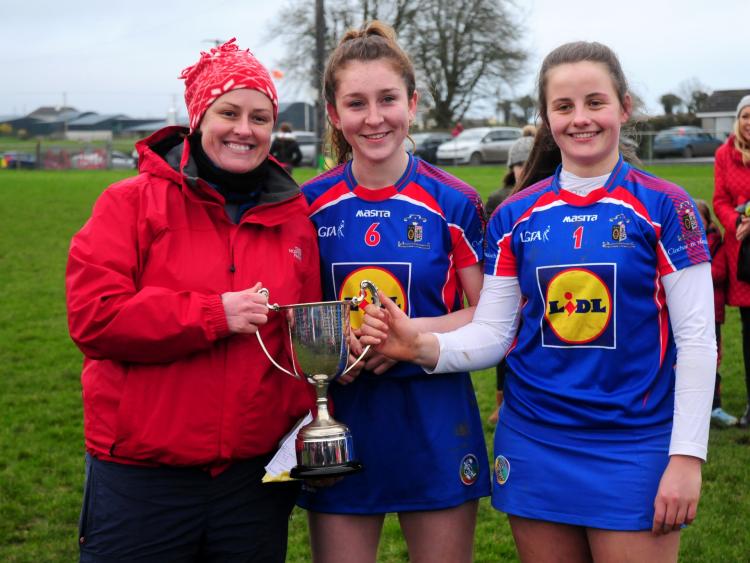 Ursulines have that winning feeling

Ursuline Secondary School Thurles came out on top in a hard fought battle with neighbours Presentation at Templetuohy this afternoon to claim their first ever Munster Senior A Colleges title.

A point six minutes into injury time from sharpshooter Eimear McGrath helped Ursuline Secondary School Thurles to the Munster Colleges Senior A title at Templetuohy this afternoon for the first time ever unleashing scenes of unbridled joy when the final whistle sounded - some eleven minutes of additional time had been played.

A game of real intensity and with scores at an absolute premium, the winner was always going to come from whoever had their noses in front at that all-important last blow of the whistle. And, though Presentation had a chance to equalise from a placed ball, it was the Ursulines who prevailed to claim the silverware and win the 'Battle of Thurles' in the process.

Success for the victors did not seem likely at the interval - they were deadlocked at 0-3 apiece, but the Pres' had played into a stiff breeze and the smart money was on them capitalising once they had turned around.  It didn't happen though and the gritty, hard fought nature of the game continued with the battle played in the trenches as each side scrapped for every morcel of possession.

They were level for exactly thirty minutes of the second half, but when McGrath pointed that winning free - her fourth of the afternoon - there was real panic in the Presentation side. It seemed as though a replay would be on the cards, but suddenly they now had to find a score. And, to give credit where it is due, they did all in their power to grab that equaliser with girls putting their bodies on the line in a bid to create attack and break up Ursuline play. Apart from that free chance from Niamh Ryan though, they were unable to fashion a leveler, and in sharp contrast to the joy of the Ursulines, the Pres' girls were broken-hearted at having come so close.

There was  a huge attendance in Templetuohy to witness this unique, magnificently sporting meeting of the two Thurles schools.

See this weeks Tipperary Star for full report and analysis.