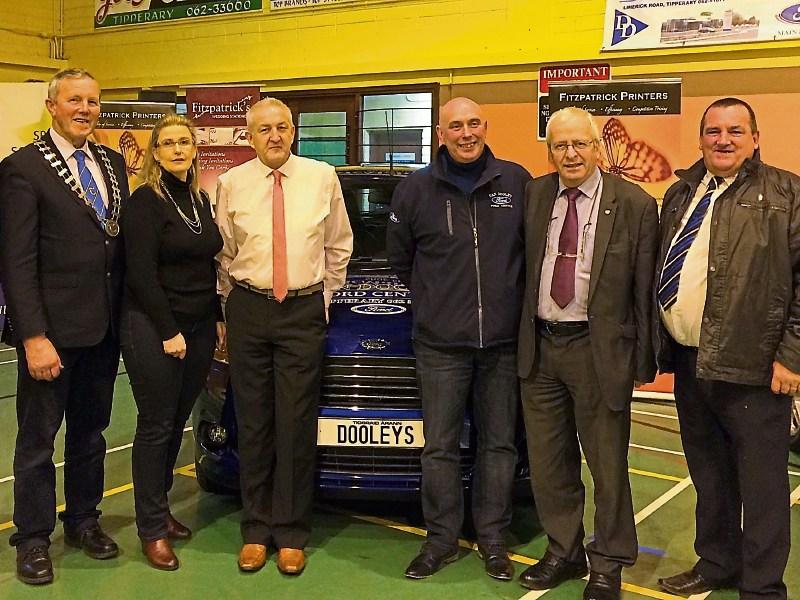 Present for the launch of the promotion, which was held in association with Dan Dooley Motors and Fitzpatrick Printers, were Cllr. Roger Kennedy, Cathaoirleach of the Cashel/Tipperary Municipal District, Mattie McGrath, T.D., Cllr. Michael Fitzgerald and Cllr. Martin Browne.

In launching the promotion the Chairman of the Canon Hayes Recreation Centre, Martin Quinn, said that they were hoping for a complete sell out of the 1,000 tickets available in the private member's draw. "This promotion will alleviate the current cash flow crisis affecting the Centre, so it is vitally important that this is a major success. Later this year we will celebrate the 30th Anniversary of the Centre and it is my fervent wish that we will have secured the future of this magnificent facility by the time of our anniversary in September 2017" said Mr. Quinn.

It was pointed out to the attendance that there were two Ford KA+ cars (or cash equivalent) on offer in the promotion along with a host of very generous cash prizes. The cars as supplied by Dan Dooley Motors were on display on the night and thanks were accorded to Dooley's and to Tipperary Co-operative for their sponsorship of refreshments for the launch along with thanks accorded to Aidan Kennedy for providing sound for the event. Special thanks was given to Elaine Fitzpatrick & Fitzpatrick Printers for their very generous sponsorship of the design and printing of the draw brochures, tickets and posters.

One of the founder members of the Complex, Paul Grisewood, was thanked for coming on board to assist in the organisation of the draw. Speaking to the assembled guests Mr. Grisewood spoke about the legacy of the late Canon Hayes and why he is remembered in Tipperary Town. "When he was a curate in Tipperary Town Canon Hayes developed many initiatives to support local people including developing allotments on land on which the Complex now stands, in developing a turf cutting scheme and in encouraging local communities to accept the Rural Electrification Scheme. We should remind a whole new generation of people why it is so important to remember the name of Canon Hayes and to honour his memory" said Mr. Grisewood.

Martin Quinn said that the late Canon Hayes or the founders of the Complex would not thank us if we walked away from a time of crisis and that was why he was asking everyone to 'put their shoulders to the wheel' to ensure that this promotion was a success. "I am looking forward to having the first two draws on the Main Street in Tipperary Town on St. Patrick's Day and to announcing that it has been a complete sell out" said the Centre Chairman.

Draw tickets are now available from promoters or from the Canon Hayes Centre, and entry to the draw will also allow members to avail of specially discounted vouchers for use in the Centre on different activities.

The first two draws will take place on St. Patrick's Day and further information is available from 062-52022.