From the Dome, Thurles 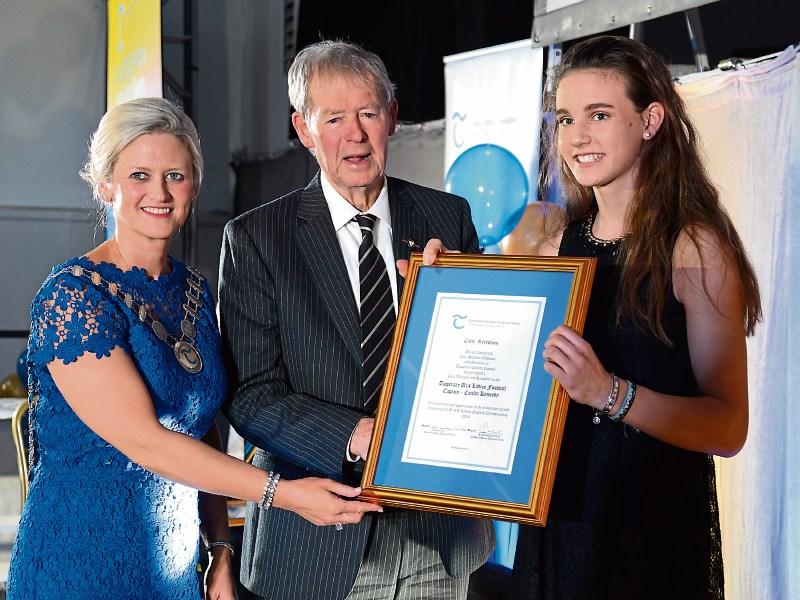 Over 250 guests and local GAA stars of all ages packed into the Dome at Semple Stadium on Friday night, for an official County Council Civic Reception in honour of Tipperary's successful GAA Teams of 2016.

Cathaoirleaach of Tipperary Co. Council Cllr Siobhán Ambrose formally proposed the motion of a Civic Reception, seconded by Cllr Michael Fitzgerald, with contributions from all the major parties and independents, including Cllrs Roger Kennedy, Martin Browne, and Michéal Lowry.

“History is also being made tonight as it is the first time that Tipperary Co. County Council is honouring no less than eight County GAA teams. It's great to see so many young people being awarded tonight. In honouring tonight's eight county teams, Tipperary Co. Council is also acknowledging the magnificent work that is being carried out by an Cumann Luthchleas Gael, and their role in supporting and encouraging our young people in our native games, and in more recent years, in highlighting the importance the health and well being in the area of mental health in young people.”

Since 1884, the GAA continues to be the cornerstone of every town and village in Ireland, with over 2,200 clubs across the 32 counties, and an esimated worldwide membership in excess of 500,000 people. “Here in Tipperary we are also supporting those who support those teams, without which those teams wouldn't survive,” added Cllr Ambrose.

Following an address by County Council Chief Executive, Joe MacGrath, Michael Bourke - Chairman of the Tipperary County Board - presented gifts and framed scrolls to the Chairmen, Managers, and Captains of both the Senior and Minor Hurling teams. Mr Bourke said Tipperary is a “sports mad County. We always desire to produce it best. Being the best does not come easy. It takes countless hours of time, dedication, commitment, and a desire to succeed.”

Chairman of the Tipperary Football Board, Joe Hannigan, said receiving the highest honour that the Council can grant, bestows great kudos on all the players and supporters. “Our dream is to win an All-Ireland before 2020. This year, we made a lot of inroads on that. 'Pipedreams' can become a reality. Looking back since 2005 onwards, we've had a lot of success. With new coaching in place, we won a minor All-Ireland in '11, another Munster and Minor in '12, and we were in the Minor All Ireland and U21 All Ireland last year (2015)... The players of today are upholding the tradition that is Tipperary Football.”

“On our first All Ireland success in 1974, Tipperary County Council also honoured us with a Civic Reception, which is now a treasured memory,” said Ms Ryan. “Ladies Football was not honoured then as it is today, played in all 32 counties. In recognising us in those early days, it gave us belief in ourselves to keep it going and make it the wonderful game it is today. Thanks to the GAA for the use of the facilities as we look foward to further sucess in 2017.” Ms Ryan also thanked the County Council for their letter of congratulation on the occasion of her being inducted into the GAA Hall of Fame.