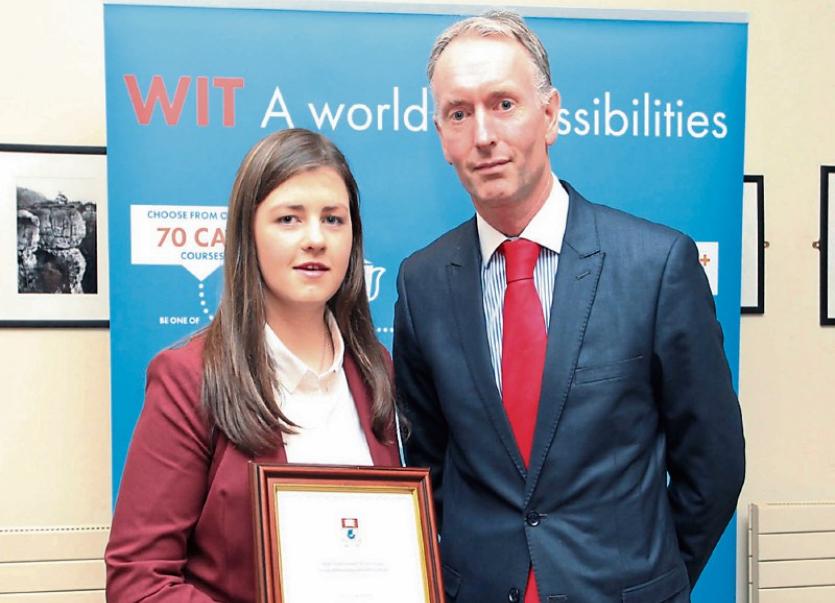 Róisín O’Donnell, a member of the 2016 Leaving Certificate class is currently pursuing a degree in Agricultural Science in WIT.

Prior to taking up her studies Róisín received one of the four President’s Awards from WIT.

The recipients of the President’s awards are individuals of outstanding ability who have demonstrated leadership through a number of areas and Róisín excelled in social innovation (i.e. Gaisce awards) and making a difference in a community, academic, social or cultural activity.

Róisín excelled during her school life in Cashel Community School. There were four stages in the selection process and she was then shortlisted for interview.

The head of science was among those on the interview panel.

When Róisín was awarded the accolade she was appointed student ambassador. Being awarded such an accolade involved being part of any event that happens in WIT. Thus far Róisín has been involved in two Open Days and gave tours of the college, giving talks to students interested in her course, Agricultural Science, and telling people about WIT.

Another aspect of Róisín’s role is the promotion of WIT and to take ambassadorial and leadership roles in the college.

Cathal O’Connor was also a member of the Leaving Cert class of 2016 and is now studying Engineering at UCD. Cathal received an entry scholarship after getting 625points in his leaving Certificate. This scholarship recognised his academic achievement. This award was also part of a range of UCD initiatives put in place to recognise exceptional students. UCD’s top tier of awards is administered by the UCD Ad Astra Academy which supports an exceptional group of high achieving and highly talented students including Academic, Elite Athlete and Performing Arts scholars.

Staff and students from Cashel Community School would like to wish Cathal & Róisín every success in their future careers.