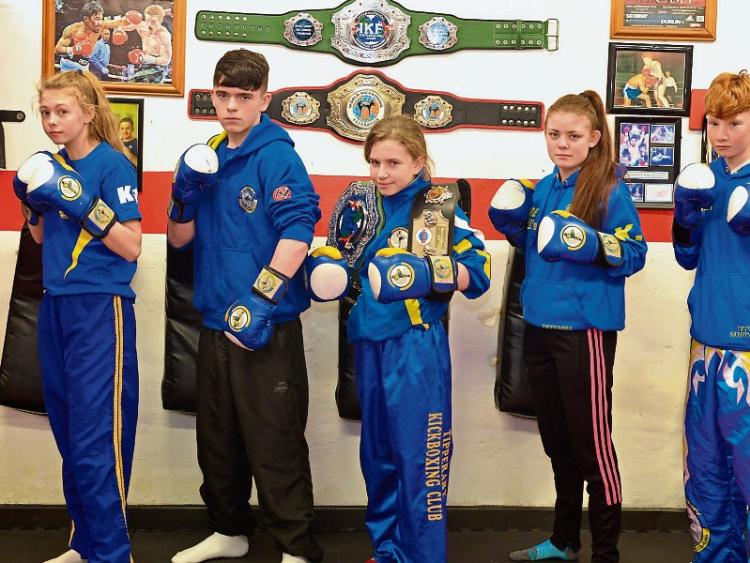 The Tipperary Kickboxing club is preparing to send five fighters to the ISKA World Championships in Athens, Greece from May 31 to June 3.

In 2014, five fighters from the club travelled to the World championships in Italy and returned with five medals including gold, silver and bronze. Their win at the time was unprecedented and their Coach Craig Sutton was surprised and shocked as he only had the intention of getting some good experience for the competitors.

“This time we are still training hard for the Worlds and I hope that things will go well again,” said Coach Craig. “All the fighters have good experience behind them so I’m confident enough. We’ve made a few changes this time to the preparations with longer training hours.  Psychologically I tell the fighters to stay motivated because it doesn’t get easier and without motivation it’s a struggle to push yourself. d.”

Twelve year-old Alicia Chambers from James Connolly Park Tipperary town obtained gold at the World championships in 2014 when she was just ten years of age. She has also won the IKA (Irish Kickboxing Association) National Champion title four times. “I’m hoping to claim a gold medal again at the World Championships. We get up and go running very early in the morning and training can be hard but I just want to do my best.”

Scott Carey Massey won a sliver medal at the World’s in 2014 when he was 11-years old. He also has an IKA National Championship title belt. Scott, from Pearse Park will be 14-years old when he heads out to the World Championship. “This time I’ve been preparing by going to the gym to build strength and stamina and I’m looking forward to the world competition.”

This will be Chloe Quinn’s second visit to the World Championships after bringing back a bronze medal when she was 16 years old. Now 19, Chloe will be in the senior full-contact category rather than the Junior light-contact class and her training has changed in preparation. “This time due to the full contact, I’ve concentrated more on fitness and technique,” said Chloe from Aherlow Heights Tipperary town.

Natural athlete 15-year old Shannin O’Dwyer from James Connolly Park Tipperary town will be competing in the Worlds for the first time. “I’ve been with Coach Craig for nearly two years and in that time I won a IKF National title so I’m hoping that experience will give me confidence going forward.”

Sixteen-year-old Aaron Frewen from Mackanagh, Glen of Aherlow, started kickboxing when he was 8-years old but stopped when he was injured. He returned to the sport at 12 years old and has competed in six fights since.  “I’m really excited to be going to the World championships and when I recover from a recent injury I’ll be training with more cardio to improve my fitness.”

The fighters are looking for sponsorship to help them represent Tipperary in the World Championships. You can sponsor a fighter individually or the group. Please contact Linda Swords on: 087 7721870 for further information.