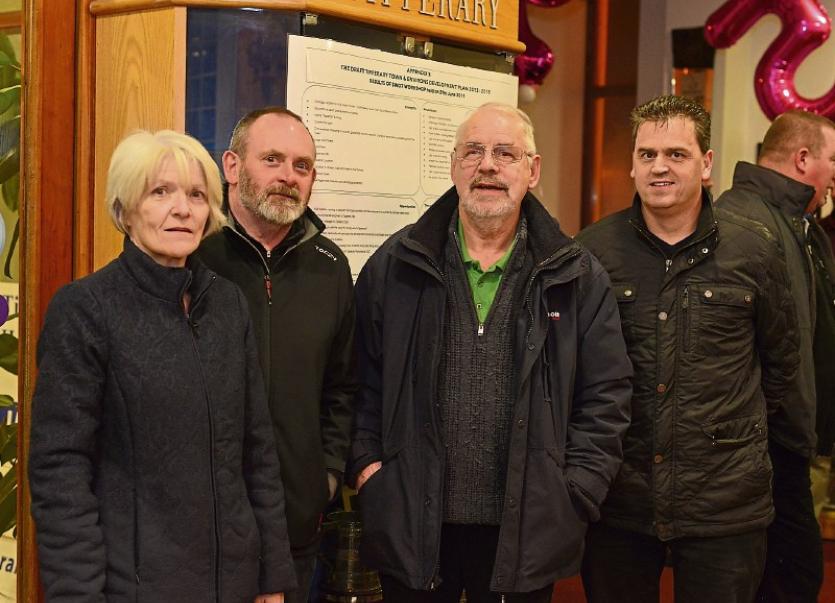 The Jobs for Tipp action group will meet with the IDA and Tipperary County Council to present a case to bring jobs to Tipperary Town.

The launch of the group late last year attracted a huge crowd which was matched on this occasion.

Concerned citizens of Tipperary Town and a wide catchment area attended to hear the five TDs in the constituency and local elected representatives on how they were going to help deliver jobs to the town.

The TDs - Seamus Healy, Mattie McGrath, Jackie Cahill, Alan Kelly and Michael Lowry - and the local elected representatives were asked why they were not doing more to bring jobs to Tipperary Town.

Elected representatives were asked why the local authority was re-zoning business and commercial land to agricultural.

This move restricted options to would-be companies that wanted to set up business in Tipperary Town, maintained the concerned locals who directed questions to the politicians.

They also demanded answers on commercial rates. They insisted that support was required for existing businesses that were struggling to keep their doors open.

Audience members asked for a show of hands from the politicians to see if they agreed commercial rates should be reduced.

When all hands were raised, audience members asked why, if there was such agreement, did Tipp/Cashel Municipal Council vote recently for the equalization of rates resulting in Tipp Town’s rates being increased.

Councillors explained talks between the County Council and the owners of the former PAL factory and the former Namco site had taken place. The use of the sites was discussed.

TD Alan Kelly said he was working on bringing a new business project to one of the sites available in Tipperary town. Cllr. Roger Kennedy explained that the rates had to be equalized throughout the county before a reduction in certain areas could be carried out.

Most of the public representatives said that a two-tier commercial rate system needs to be introduced to account for income rather than square footage.

The forum was presented with ideas for progressing the campaign to attract jobs to Tipperary.

These included the decentralisation of offices from Dublin to Tipperary, marketing two sites in the town and obtain anchor tenants, eliminate pay parking, concentrate on developing small industries and a suggestion that the councillors take control of the County Council to make decisions that will help the town.

Those in attendance pointed to the absence of the town planners, engineers and administrators from Tipperary County Council, who were all invited to the public forum event.

“If you consult the public about decisions in the town they will feel they own it and will support it,” said Maureen Walsh, Jobs for Tipp.

“We have over 2,000 followers on Facebook but to see the auditorium full of supporters confirmed to us how important our mission is.

“The forum was a turning point and showed that people are not going to put up with lack of consultation anymore.

“The County Council refers to public consultation all the time in their literature but this is not happening at all.

“There is now a sense of hope, support and a determination for more public engagement on the future of Tipperary Town.

“Going forward Jobs for Tipp will create a task force to meet with the powers that be. We need to know what the truth is for the plans of Tipperary town so we can deal with it and take action from there.”