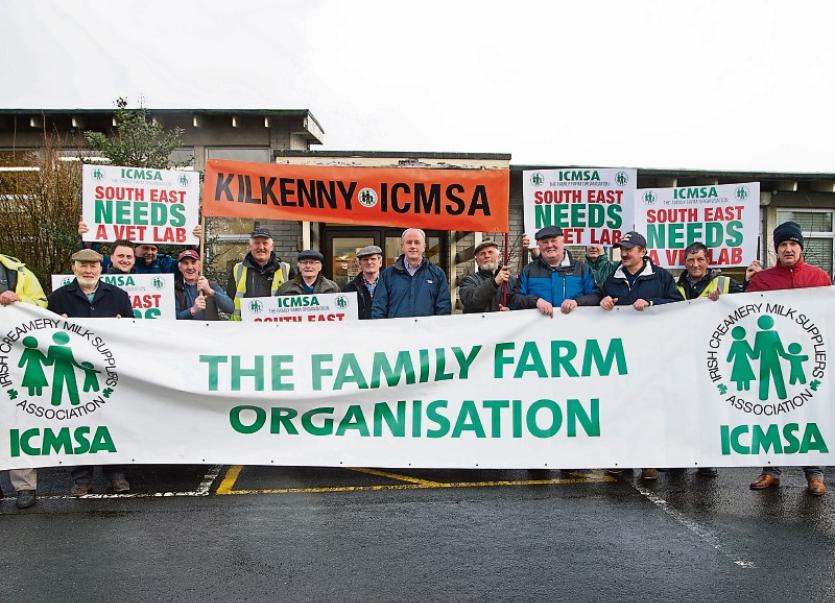 The Chairperson of Waterford ICMSA, Carrick-on-Suir farmer Billy O’Callaghan, has said that he is satisfied that all involved in the process around a “review” of the status of Regional Veterinary Lab in Kilkenny now know categorically that farmers all over the South East regard even the prospect of closure or amalgamation as an inexcusable degradation of a vital piece of agri-infrastructure at precisely the time when the region’s farmers and critically important food production sector needs reassurance and support.

Several prominent Waterford farmers were part of the demonstration that met members of the Review Group as they arrived at the Leggetsrath facility to protest against the threatened closure and point out that in the event of the closure going ahead, local farmers would be expected to travel to Dublin or Athlone to avail of the next nearest laboratory.

Mr O’Callaghan said the idea that one of the state’s foremost food production areas and one of Europe’s most intensive dairying districts would be left without an official veterinary lab was, as he put it, “mind-boggling” and he promised that ICMSA would resist any efforts to reduce further the number of regional vet labs which now stood at a paltry six for the whole state.

“A delegation representing ICMSA executives from all across the South East met with the department’s officials and we made it clear that farmers all over the South East regard the idea that this office could be closed as nothing less than demented. How is this idea meant to fit into last week’s announcement of the ‘Realising our Rural Potential’ policy in which Minister Humphreys pledged to support real economic reinvigoration of rural districts? A mere week later ICMSA discovers that one of the key state aids for the whole South East’s farming and food production sector is being considered for closure or amalgamation? It is quite literally mind-boggling and beyond comprehension that the region would have this facility unceremoniously stripped-out as exactly the time when wherever we farmers look, we see uncertainty. ICMSA will resist this negative proposal every step of the way”, promised the Carrick-on-Suir farmer.