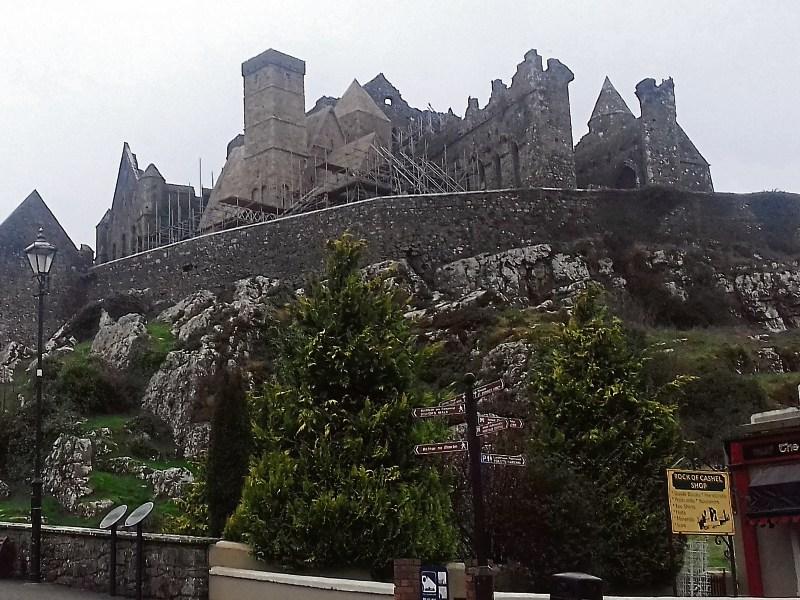 The gradual re-emergence over the past few weeks of a golden coloured Cormacs Chapel from beneath a mass of scaffolding on the Rock of Cashel is, according to Tom Wood, “a sight to behold.”

When scaffolding was erected around the 12th century sandstone building just six years ago so as to enable the commencement of difficult conservation work he had feared that the remarkable building, often referred to as the gem of Irish Romanesque Architecture, would be out of bounds and out of view for an eternity.

Having worked on the site as a guide and supervisor for more than 25 years he contends, that, “while the cluster of five buildings dating from between the 12th and 15th centuries and overlooking the old City of Cashel and the Golden Vale is unique, Cormacs Chapel is a national treasure.

Work commenced on the Chapel in 1127 and it was consecrated with great pomp and ceremony less than eight years later, in 1134. While limestone was prevalent throughout the local countryside, a more easily worked sandstone, sourced some miles away in Drumbane and hauled across the plain, enabled the skilful masons produce a masterpiece in stone.

With its clochan or beehive style high pitched roof of stone, towers at the junction of its nave and chancel, spiral stairs leading to two crofts, blank arcading within and without, magnificantly carved tympana and north doorway, string courses, gargoyles, corbels, remnants of wall paintings or frescos and an intriguing connection with the Rhineland, it has fascinated pilgrims, travellers and writers for nigh on 900 years.”

In his book, In Search of Ireland, first published in 1930, the British writer, H.V. Morton wrote, ”more wonderful than the round tower of Cashel, more interesting than the vague lines of the ancient palace, more beautiful than the roofless shell of the cathedral is King Cormacs Chapel, the most whimsical, the most strange and the most remarkable little chapel in the British Isles. If you visit Ireland only to see this astonishing building you will not have crossed the sea in vain. I could return again and again to Cormacs Chapel and never exhaust its singular charm. If I were an Irishman, I would haunt Cashel of the Kings.”

According to Cllr Wood, the ruins on the Rock were vested in the Commissioners of Public Works in 1869 and between 1874 and 1876 considerable conservation work costing £2,317 was carried out. In 1974 a new lease of life was afforded the Vicars Choral Hall when it was sympathetically restored to its original 15th century style. Now as he eagerly awaits the removal of all the scaffolding in the coming weeks with the opportunity to get the entire building into focus again, he says, “ I am sure King Cormac MacCarthy himself would be pleased to experience the results of this conservation programme and the reverent care bestowed on his miniature Cathedral by the staff in the Office of Public Works.”