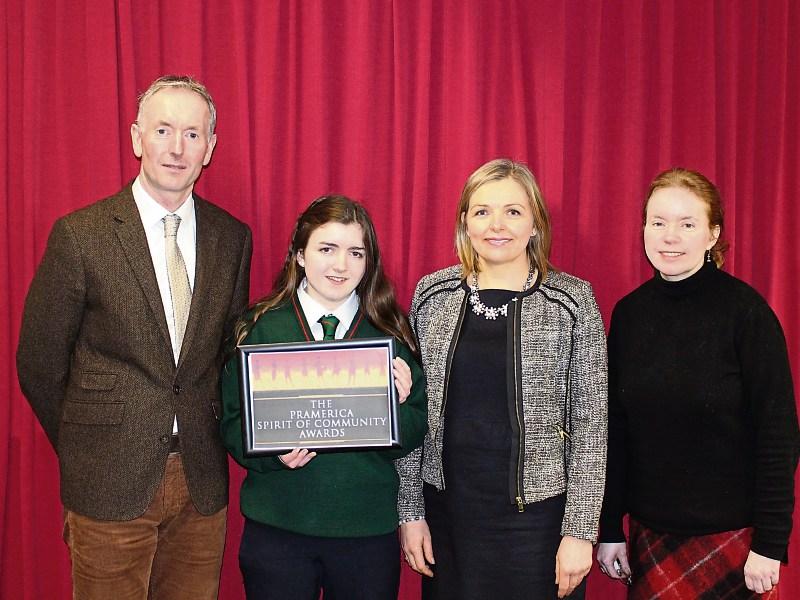 Chelsea Gibson, youth volunteer from Cashel, has been recognised in the 2017 Pramerica Spirit of Community Awards

For the dedication she has demonstrated in service to her community, Chelsea has been recognised as one of 20 finalists in the 2017 awards, the only all-Ireland youth initiative of its kind which rewards post-primary students for outstanding acts of volunteerism and the positive contribution they make in their local communities and further afield.

Chelsea, a sixth year student at Cashel Community School, has been volunteering in her community for nine years. She began her volunteering career with the Order of Malta and is heavily involved in cadet training, the senior unit and community care. Now as an Order of Malta senior member she is often to be found attending duties at national and local events including the National Ploughing Championships.

She is also a member of her local Youth Project, for which she sits on the Junior Board of Management and has trained specifically to be able to volunteer for seasonal camps for primary school children and those with disabilities. She also works with the Youth Work Ireland National Youth Action Group which works to ensure that voices of young people in this country are heard.

“Chelsea is a wonderful example of someone choosing to ‘do all the good that you can, when and wherever you can,’ said Deputy school principal Margaret Moore. She is an extremely self-effacing young lady who has met significant challenges in her personal life. Instead of using these as an excuse to abdicate from the responsibilities of young adulthood, she has used these experiences to grow and develop into an extremely emphatic young lady.”

The post-primary students, who hail from all corners of Ireland, will be presented with €500 and an engraved silver medallion at the gala awards ceremony on March 23, at the Crowne Plaza Hotel in Dublin with special guest speaker Irish international rugby player Jordi Murphy. At the gala, two of the students will be named All-Ireland Youth Volunteers of the Year, receiving €1,000, a gold medallion, a crystal trophy for their school and an all-expense paid trip to the United States in May to participate in the Prudential Spirit of Community Awards ceremony.

“The 20 finalists are extremely passionate about the work they carry out in their local community, and their stories are truly inspiring,” said Andrea McBride, vice president, Pramerica Systems Ireland. “It is humbling to see the commitment and dedication from these young people, and we are honoured to recognise the volunteering they are doing in their local schools, communities and abroad to make the lives better of those less fortunate than themselves.”

The programme is run in partnership with the National Association of Principals and Deputy Principals (NAPD) and the General Teaching Council for Northern Ireland (GTCNI). The programme is also supported by Volunteer Now, Volunteer Ireland, Scouting Ireland and Foróige.

Chelsea recently became Cashel Lions Club Young Ambassador for 2017, was winner of the National Final and will represent Ireland at the next stage in the Young Ambassador competition - the final for winners from Ireland, England, Scotland and Wales, in England. The winner of Ireland/ UK final stage then goes on to compete in the European final which will be held later this year in Switzerland.