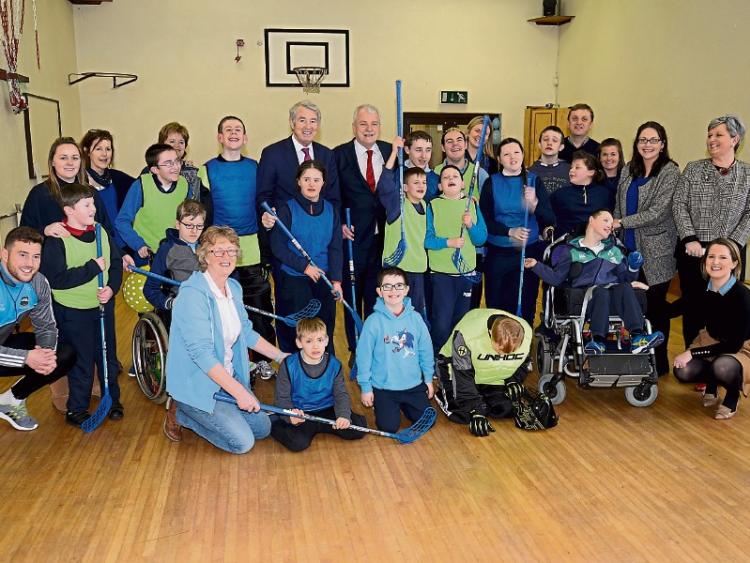 Minister Finian McGrath pictured on his visit to Scoil Aonghusa in Cashel with Deputy Michael Lowry and pupils of the school. Below left, the visit to Scoil Chormaic earlier in the day.

'Bad bad Leroy Brown' came to Cashel town this week where he visited Scoil Chormain and Scoil Aonghusa and was the toast of the day alongside Deputy Michael Lowry.

The Minister for Disabilities Finian McGrath just picked up the guitar and entertained the 222 pupils in Scoil Chormaic as part of his whistle stop tour of the school, which was followed by another tour of Scoil Aonghusa later in the afternoon.

The Independent Minister had been welcomed to Cashel by Scoil Chormaic Principal, Ms Lorraine Lowry and the many children  as he made his way around the facility, visiting and viewing the facilities, the playgrounds and the farm.  And, though he was hugely impressed by the wonderful atmosphere of care and the dedication and commitment of the staff, he acknowledged that further resources are very necessary, including the provision of  a sports hall for the school.

“From what I have seen I want to commend all the staff for their tremendous work for children and young adults with physical and intellectual disabilities.  They are doing amazing work and I as Minister for State have to ensure that they get the maximum support they need.

“I am also looking at some of their capital projects. Michael Lowry has been  lobbying me very strongly and I am working very closely with him in relation  to service generally in Tipperary for people with physical and intellectual disabilities. He is always on my case in relation to local issues and I will be going back to Richard Bruton now in relation to the capital projects because they need to be supported in a very very strong way,” Minister McGrath told The  Tipperary Star.

The Principal had outlined to Minister McGrath how, despite the tremendous staff in what she termed an 'amazing school'  very little has changes in relation to lack of services and supports.

“There have been dressed-up, re-packaged and re-shaped attempts under the guise of re-structuring. The simple fact is that the HSE do not employ enough therapists to meet the growing demands. At present we have no psychological service to our school and this should be a fundamental,” said Ms Lowry who added that the number of children with autism in skyrocketing. She suggested that research into the genetic or environmental factors which are contributors to this increase needs to be investigated.

Deputy Michael Lowry pointed to the need for a sports hall at the school and said that the matter is being pursued, but there are difficulties in terms of location on the Scoil Chormaic campus.