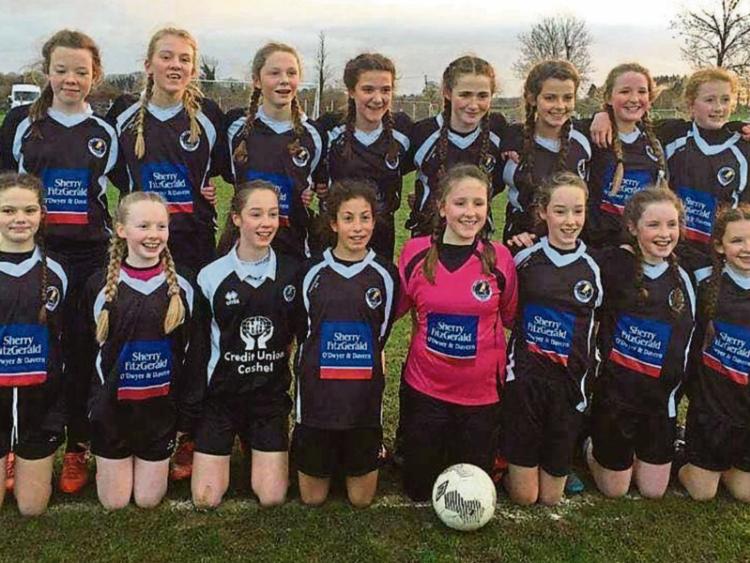 Cashel Town Girls prepare for another huge push towards All Ireland success this weekend.

After a week’s delay, caused by a protest from their last Dublin opponents, Cashel Town’s U14 girls are now only 70 minutes from a place in an FAI Cup final, when they face off against Dublin side Kilmore Celtic at Palmershill next Sunday afternoon.

The girls would have already had this game played but for what seemed like a very cynical complaint after the quarter final, when the game kicked off a little late, despite the girls comprehensive win on the day. Sense prevailed however and the FAI backed the Cashel girls' side, and the result stood.

That means that the original draw for the semi-final, which gave Cashel Town a home draw, also stands, and that is what will bring the sides to “The Hill” on Sunday.

The girls will be well up for this game, and full of confidence after that win in the quarter finals. In that game Allessia Mazzola was the goal hero with a first half hat trick laying the foundation for the victory, and the fourth goal coming from midfield general Emer McCarthy.

The whole victory however was based on the solid defence marshalled by Aoibhe Gayson and Lucie Gilmartin that has barely given up a chance in this year’s tournament, never mind a goal. Cashel will also be looking closely for goalkeeper Cora O'Shea to return from injury after she was substituted in the previous game.

All said however the girls are in a scintillating run of form, winning their league game last weekend by eight goals to one over second placed Killenaule. The fact that six different girls got on the scoresheet also shows the strength in depth enjoyed by coaches Alan Hobbert, Marie Gayson and Con Hayes. This trio have done a magnificent job in coaching the girls all year, keeping them fresh and hungry and will have the girls fit and firing on Sunday.

The club are looking for more than just the players on the pitch and the coaches on the side to get them over the line next Sunday. One of the most heartening sights for the club at the quarter final was the huge crowd who turned out to cheer the girls on. Five years into its existence it was the biggest crowd to watch a schoolgirl’s game in Cashel, but the club are hoping they will break that record again on Sunday. The quality on show will surpass what has gone before as the Dublin girls have already won a national title this season, but will hold no fear for this crop of Tipperary girls.

So if you want to see the cream of schoolgirl’s soccer in Ireland, it will be on your doorstep in Cashel on Sunday, with the game kicking off at 2pm. This will be historic so let’s get behind our girls and cheer them all the way to the final!