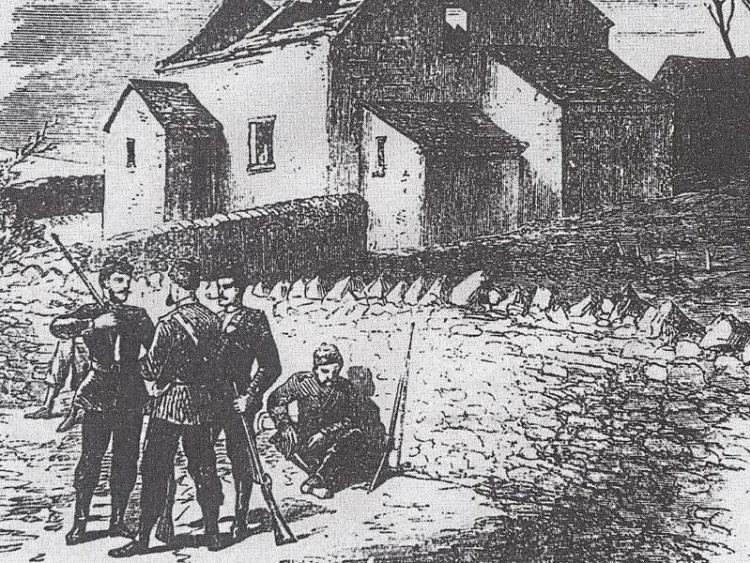 This Sunday March 5th marks the 150th Anniversary of the Fenian Rising of 1867.

Although one more in the list of unsuccessful military uprisings against British rule, the Fenian rising was a significant event, both nationally and in Co Tipperary. The episode was one which would help to shape the future of Ireland.

The Irish Republican Brotherhood members who were the guiding hand in staging the 1916 Rising, which eventually lead to Irish freedom. took their inspiration from the leaders of the Fenian revolt of 1867.

On that night in 1867, bands of Fenians rose out all over the country in what was the first attempt ever to form an Irish Republic. Borrisoleigh and the surrounding areas were no exceptions, with groups assembling at Barnane, Dovea, Moyaliffe, Roskeen, Drombane and in Borrisoleigh itself.

While the rising could be described as an abject failure, with the participants quickly rounded up and imprisoned or transported, it did go on to inspire a new generation fifty years later with the insurrection of 1916.

In Templederry, a band of Fenians made an attempt to raid ''a house of the gentry'' to procure arms. However, the police and militia were aware of the plan and the men were ambushed and captured. In the incident, one of the group, Jeremiah Bourke was shot and seriously wounded. His fellow conspirators were captured, tried and transported to Australia but because of his injuries, the trial of Bourke was delayed.

The following year he was tried in Kilkenny and sentenced to eighteen months in prison. Jeremiah Bourke was to go on to play an important role in the War of Independence. His family home in Templederry was a noted safe haven for men ''on the run'' and indeed, Sean Treacy, Seamus Robinson and Sean Hogan were to find refuge there.

His greatest contribution perhaps, was his role as a judge in the Republican courts. As the country bordered on anarchy in the wake of the truce of 1921, with burnings, reprisals and acts of vandalism becoming commonplace, Bourke stepped in and was steadfast in the protection of his Protestant neighbours, ex British army men and retired RIC.

On Sunday, March 5th, between 1.45pm and 2pm, we assemble at Ballyroan bridge and walk the mile to Glenkeen graveyard, to the grave of Jeremiah Bourke.

Jeremiah Bourke, at whose grave in Glankeen, we are commemorating the Fenian rising was born a short distance from the ancient monastery of St Cualain where he now rests. Born during the Famine years of the 1840s’ he was just a young man when he joined the Fenian Brotherhood. Going in search of arms he and a group of his Fenian comrades were surprised by a police patrol near Templederry village.

The police, aware of their plan, allowed them pass and then opened fire wounding Bourke and capturing his colleagues. All were tried and sentenced to various terms of imprisonment.

Jeremiah Bourke was still alive when his children’s generation started their revolt in 1920 in Tipperary. Bourke’s home in Templederry was a safe house where the famous Tipperary fugitives Sean Treacy, Dan Breen, Seamus Robinson and Sean Hogan were sheltered.

In the 1918 General Election he was one of the many Tipperary proposers of Joseph McDonagh’s candidature. He became a respected judge in the Sinn Fein courts set up to replace the ascendancy controlled courts which had sentenced him and his Fenian colleagues 50 years earlier. He was noted for being impartial and intervened in a number of cases where he saw sectarian motives behind operations planned by the IRA.

When he died in September 1933 Jeremiah Bourke was the last survivor of the Tipperary Fenians of 1867.

If you have family stories inked to the Fenians or other generations of Irish rebels, or their opponents, please let us know at the events in Borrisoleigh on 5th March 2017 or by contacting your local historical society.