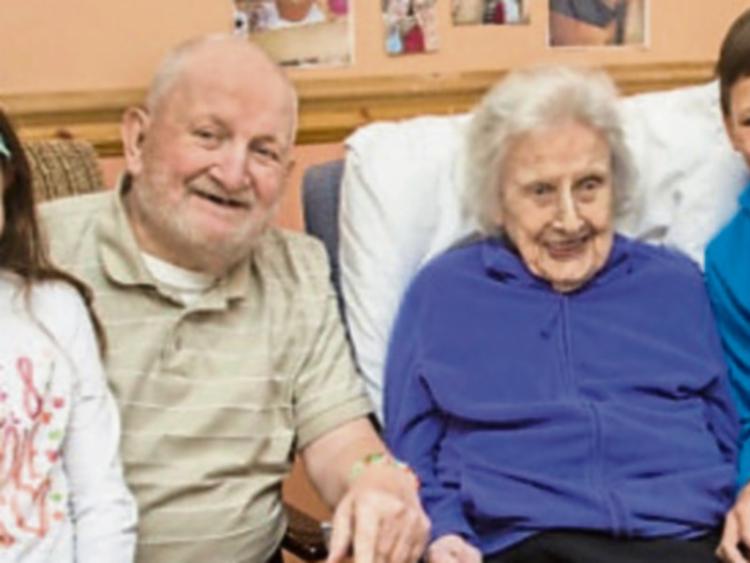 Mary Ann (May) Maxwell pictured with her son Billy on her 104th birthday at the Cottage Nursing Home, Clonmel.

Born in 1911, Mary Ann Leo lead an interesting life and, having lived in the UK for many years, returned to the town of her childhood in later life. She passed away on Saturday, March 4.

Mary Ann Leo, was born to a family in the King Street Flats on April 2, 1911, the eldest of the five children of Billy and Annie Leo, who lived at 22 The Flats. She grew up with three brothers, Jackie, Christy and Billy and a sister Addie.

In 1935, Mary Ann married Dubliner Patrick Maxwell and the couple moved there. They had three children – Elizabeth (Betty Dunphy), William (Billy) and Patrick (Paddy). They moved to England after the war, in 1945, where they lived in Keston, Kent, for 62 years.

Mary Ann worked at several jobs during those 62 years and what must be one of the secrets to her long and healthy life – she retired at the ‘young’ age of 84!

Mary Ann and her son Billy moved back to Ireland in April 2010. She moved in to the Cottage Nursing Home, in Irishtown, just before her 100th birthday where she was lovingly cared for by the staff. A highlight of her time there was a birthday party every year attended by family and friends.