Arravale Rovers’ GAA Strictly Dancing at Sean Treacy Park, was an outstanding success. An audience of 800, the lucky ones who managed to get the much sought-after tickets, were royally entertained.

Last September plans were hatched to hold a Strictly Dancing  fund-raiser and Fossetts Circus were approached to provide their massive big top. It was a master-stroke and the novelty of the occasion was all the talk in Tipperary and surrounding parishes, once the partnerships and venue were announced.

Picture the scene on the night then as the excited public streamed into the massive tented venue, despite the inclement weather. Word was out about the weeks of intensive training by the fifteen determined couples, about the throws and flips, the falls and bruises not to mention the sessions behind closed doors! It was proper championship preparation and “the ball was about to be thrown in. 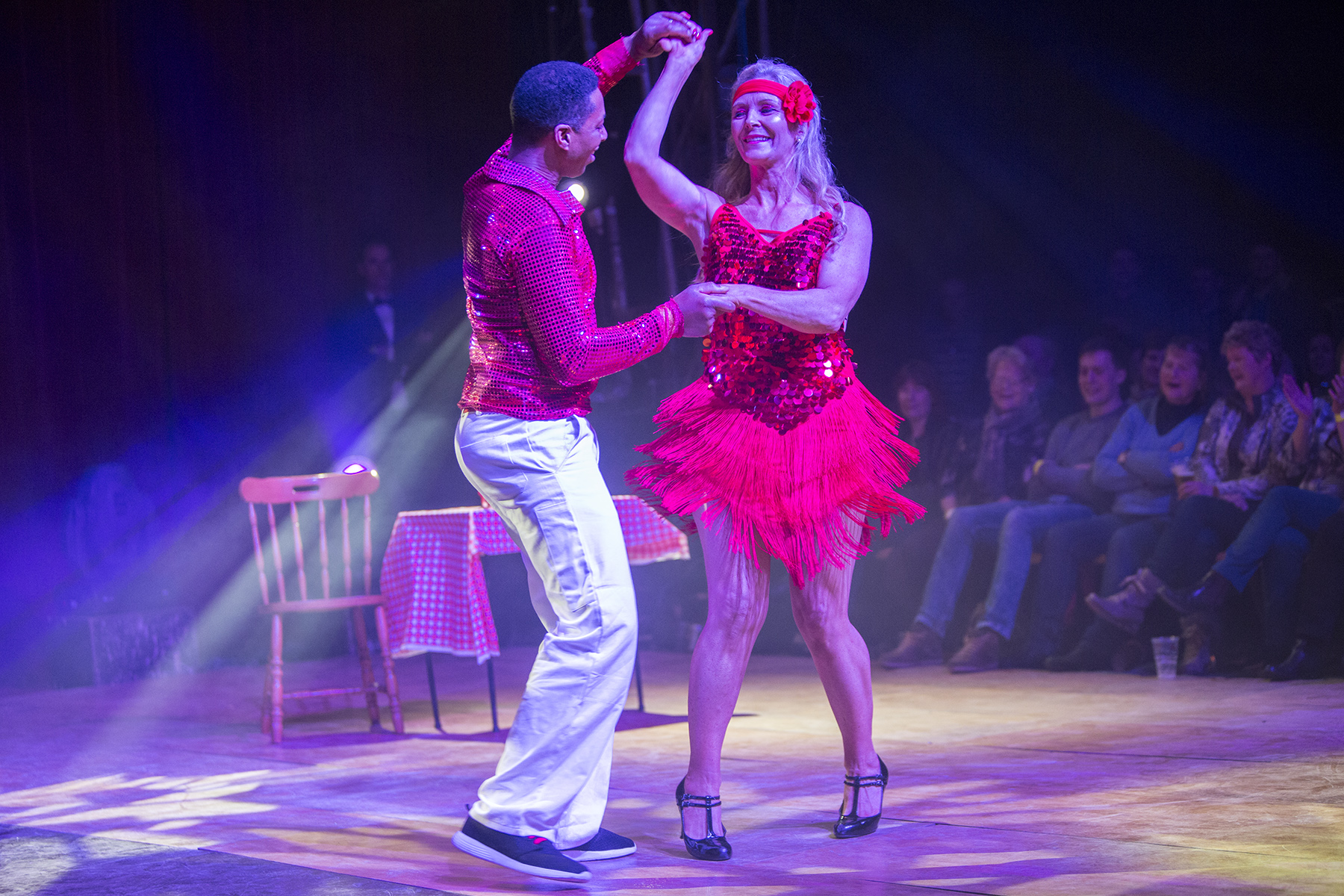 There was banter aplenty about the weather conditions suiting some pairs more than others; rumours about who was carrying an injury as the genial   hosts, The Two Johnneys introduced the judges: Paul Collins of Today FM, Yvonne Ellard former Miss Ireland, Marion Fossett of Fossett’s Circus and Brendan Cummins Tipperary hurling legend.

There was magic in the air as the couples strutted their stuff under the soaring canvas. A lively, participative and understandably biased audience were treated to three energetic Jives, a joyful  Quick Step, elegant Waltz/Jive, a smashing Charleston and rivetting Lindy Bop before the half-time whistle... when  all present took a calming interval and attempted to catch a collective breath. 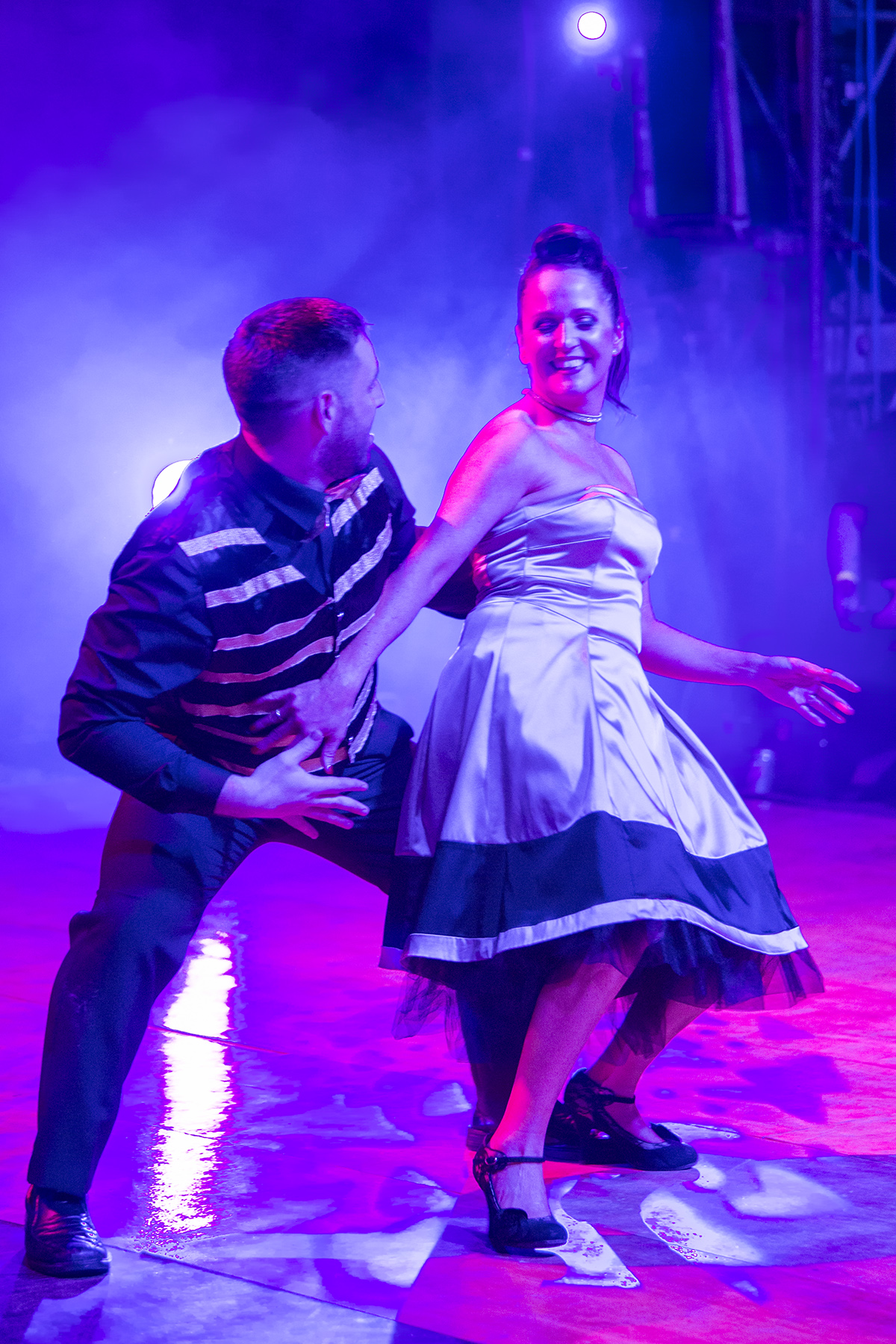 The Two Johnnys took over the entertainment during the break while fans milled round the voting stations, where they were advised to “vote early and often” for their favourite pair. As with all elections canvassing was rife and colourful! After a frenetic 15 minutes it was back to the seats time as The Two Johnneys announced that the second half was about to commence...with a dynamic Jailhouse Rock Mix! This was followed by a brilliant Charleston, two dynamic Jives, a hot hot Salsa, another outstanding Charleston and the last act was an atmospheric Paso Doble. The dancing  in all its colourful variety of movement and rhythm, its graceful expression of emotion, its wild energy and forthright proclamation of the wonders of love and living, was over. But who was going to win?

The voting continued as Fossetts entertained the audience with two wonderful acts from their all new 2017 show. There were gasps of amazement  at the expertise on view and the voting was eventually closed, just as the oustanding, brave trapeze artiste descended.

With excitement at feverpitch the dancers burst into the circus ring for a colourful, joyous lap of honour, to rapturous applause and encouragement from the tiered audience before settling themselves for the judges’ verdict. In typical Strictly fashion, an extra few minutes of tension were milked and it was  announced that the decision was a unanimous one. The envelope was produced. “Not another Oscars blunder, please” came from a wag, before “...and the winners of the Arravale Rovers Strictly Dancing are...Shane and Shelly”. 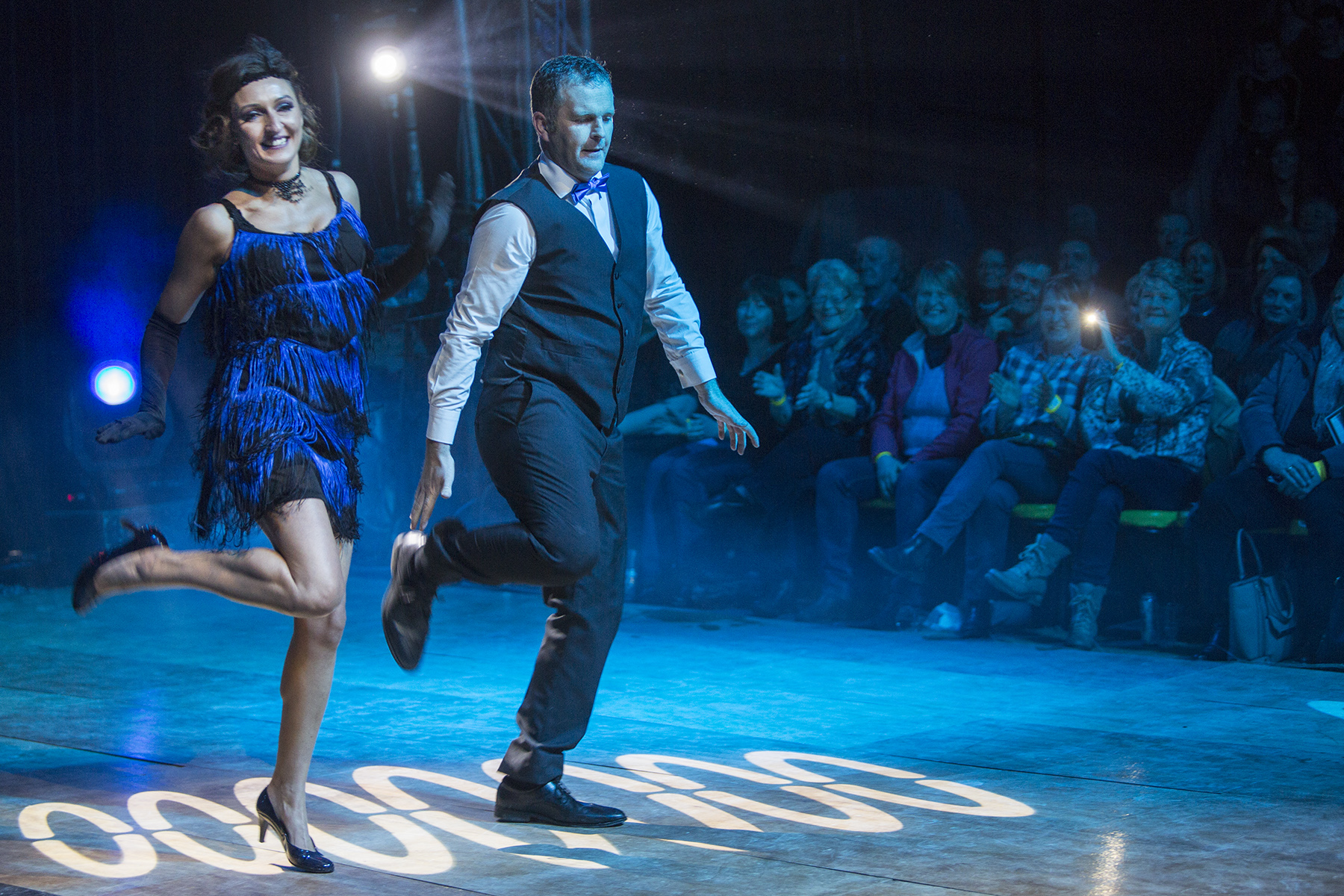 Sustained applause cheering welcomed the result and shook the big top before the night closed with the final performance of an evening “...when magic filled the air”!

The members and friends of Arravale Rovers stewarded and managed the entire proceedings impeccably with good humour and endless patience.

In turn the judges spoke about the feel-good factor generated by the whole evening’s happy atmosphere, about the community spirit evident in Tipperary town despite the challenging times and atrocious weather. 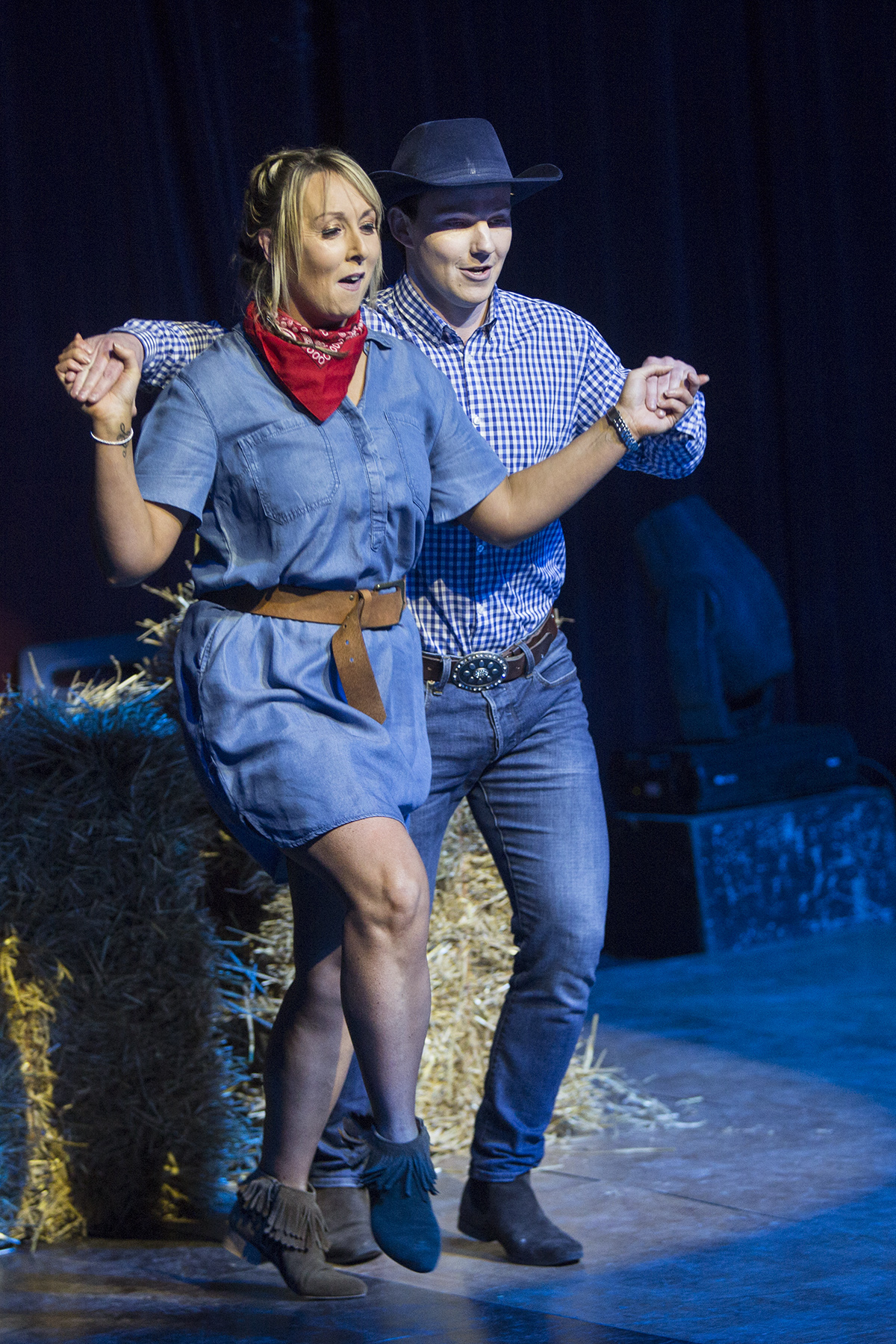 The name on everyone’s lips after the spirit-raising performances on the dancefloor was Brigid Whelan. Brigid’s mixture of whole-hearted support and gentle persuasion proved irresistible and the dance-moves on show were always entertaining, sometimes breath-taking! What a teacher of dance she is.

Fossetts Circus facilitated the event in spite of the extreme weather conditions and struck up a very good working relationship with the organisers. It was heartening to hear that club members and many of the dancers supported the circus over the week-end. 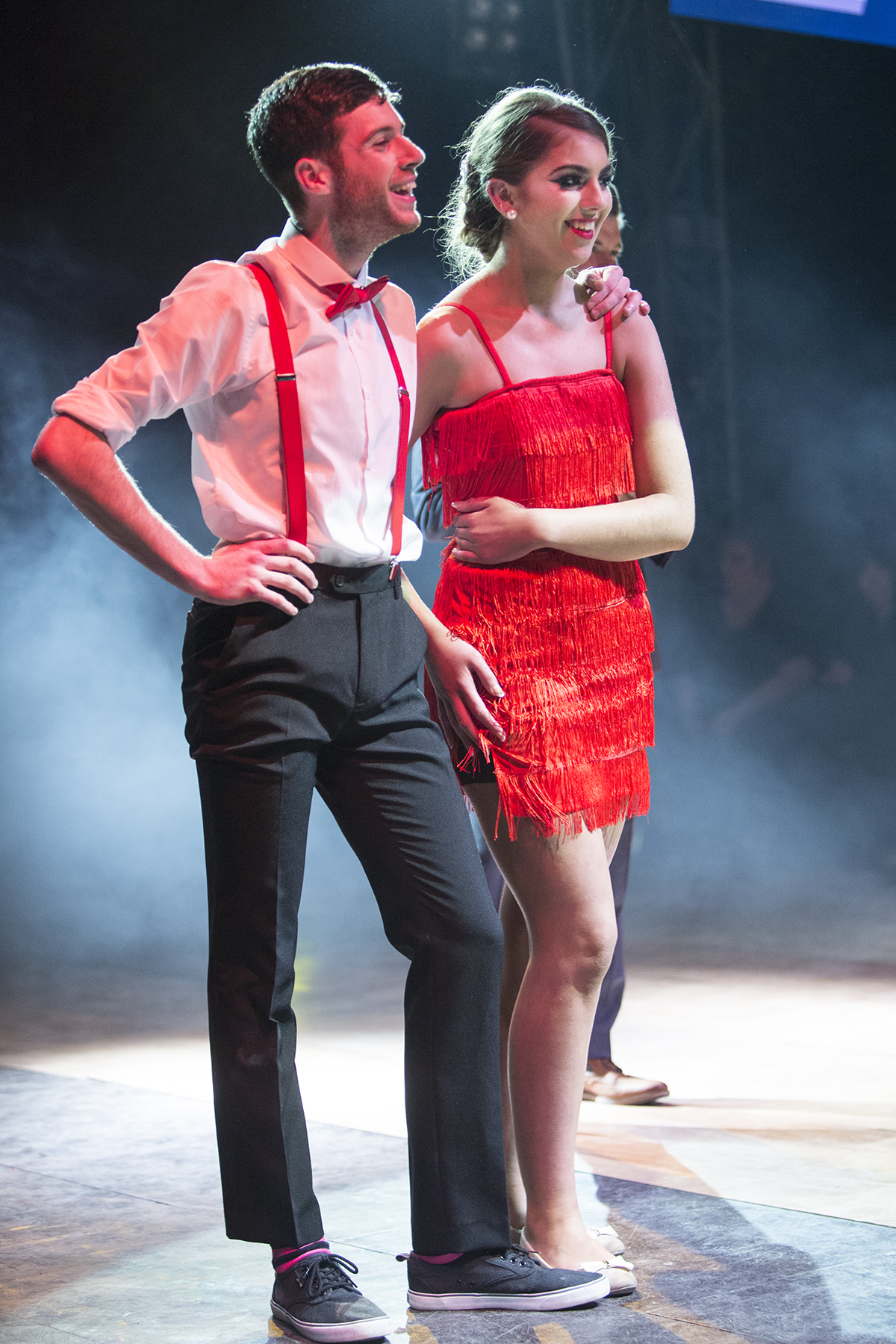 The Two Johnnys excelled as the hosts with the most, chatting and singing, interviewing and linking the flow of events seamlessly and professionally, with a fine comic touch.

Fitzpatrick Printers in Tipperary produced a first class informative souvenir programme and Elaine danced expertly as well! The support of all the local businesses as evident in the programme, was much appreciated.

The people in and around Tipperary Town took this Strictly to heart and the  interest was phenomenal. 800 attended; there would have been much more if the accommodation allowed, such was the demand. All involved were  delighted with such unstinting support.

But the dancers were the ones who made it happen and to them goes the the supreme credit and ultimate gratitude. As a group they gelled and had the time of their lives in the big top, after the many hours of rehearsals and preparations of all sorts. The happy dancers lined out as follows: Sandra Gleeson and Anthony Crosse; Dolores Bourke and Paddy Maher; Bridget Keogh and Michael O Dwyer; July Walsh and Larry Creamer; Lisa Crowe and Timmy Dalton; Helen Cremins and Paddy Delaney; Joan Heuston and Willie Dillon; Michelle ( Shelly ) Lowry and Shane Leahy; Katie Lonergan and Johnny Ryan; Elaine Fitzpatrick and Brendan Crowe; Niamh Richardson and Tadhg O Connor; Claire O Dwyer and Donie Ryan; Martina Byrnes and Maurice Smith; Sadbh Donovan and Cormac Maher; Lisa McGrath and Jason Ryan.

The DVD will be a collectors item!