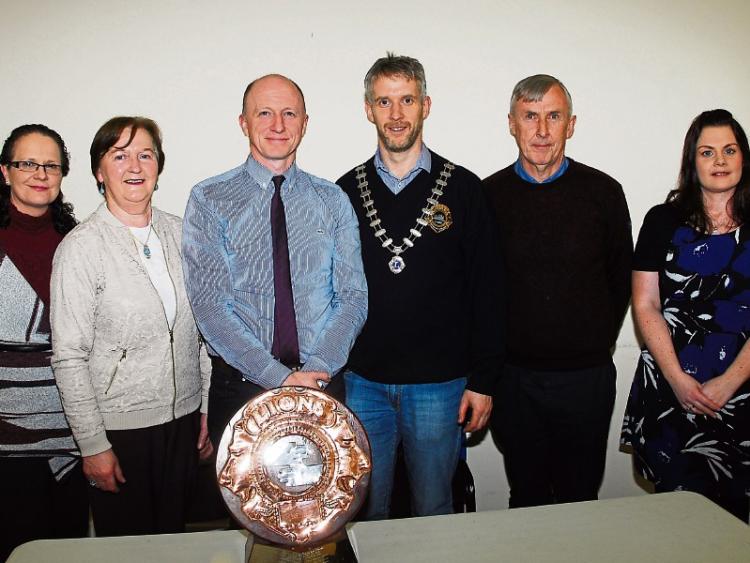 John Murray, a teacher in Cashel Community School, is the very popular choice as Cashel Person of the Year for 2017.

Mr Murray was presented with his trophy at a most enjoyable event in Halla na Feile on Wednesday night last (March 8th).

Organised by Cashel Lions Club, John became the thirty-first recipient of the honour, which was first presented to Maura McHugh in 1987. The award honours members of the public who contribute in a significant way to the social, sporting, artistic, economic life of the community during the previous twelve months.

And John Murray’s contribution was to the musical life of the parish and while that contribution has been major since his arrival in the town in 1994, it was particularly significant in 2016, when he was the initiator of a musical tribute to the events of 1916.

It was a historic event for Cashel and its people. The commemorative programme aspired to recall many aspects that were familiar in the lives of the people of Cashel during the era of 1916 and embraced many of the artistic strands outlined in the National Centenary Programme including remembering, celebrating, recalling and imagining.

Most of all it was an opportunity for young people to collaborate and participate in being part of an event that linked them with their great grandparents and hopefully something they will recall in many years to come.

This event took place on Sunday 15th May at 4pm in St. John the Baptist Parish Church, Friar Street and was funded under the 1916/2016 Centenary Programme. Later in the year Cashel Community School Choir were invited by the County Tipperary N&B Association of New York to commemorate the 1916 Rising in a once off concert.

A very important part in selecting the Cashel Person of the Year is the nomination process. A person or persons decides that somebody’s contribution to the community deserves recognition and that the Person of the Year Award is the best way of giving that recognition. The nominator sends the nomination to the secretary of the Cashel Lions Club and is then invited to come before an adjudication panel and expand on the information in the nomination, in order to convince the panel that his/her nominee is the most deserving of the award. In this case the nominator was John’s daughter, Johanna, who believed that her father was really deserving of the award and secretly nominated him and advanced his cause before the adjudication panel.

As she said at the presentation, she had appreciated the huge amount of work that his did, the amount of time he spent and the level of perfection he achieved with his students.

She herself saw his work at first hand having had him as a father, teacher, class head, producer of musicals in which she played a part, and believed she had an insight greater than most into his work, commitment and achievements.

He deserved the recognition and the Person of the Year award was the best way of doing it.

In his acceptance speech, following the presentation of the perpetual trophy by Lions President, D. J. Horan, John said he was humbled by the award and it had never figured in his sights. He was self-effacing about his achievements, emphasising that he has always been only one among many in everything he does. He paid a particular tribute to the help and encouragement he received from his wife, Karen, and his daughters, Johanna and Rose. Also from his colleagues in the school and in the wider community through the Cashel Arts Fest. Above all he was helped by the huge natural talent of young people. The final part of the celebration of John Murray’s presentation and achievement was the presentation of a memento to last year’s winner, Pat Flynn, whose name is now inscribed on the perpetual trophy as the 30th recipient of the Cashel person of the Year.