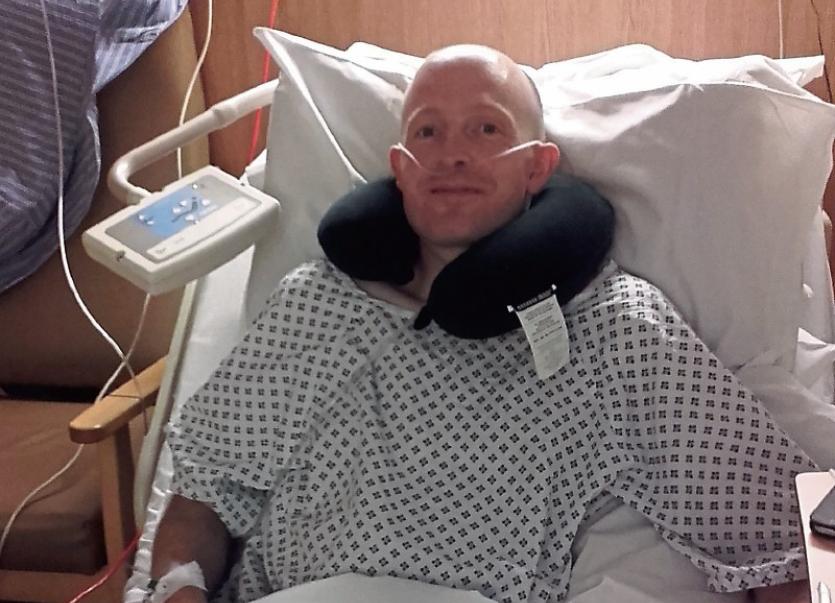 A popular Gortnahoe father who endures a daily struggle against a rare lung condition, is appealing for your help to save his life.

Des Daly can hardly breathe, and needs around the clock medication and attention to survive.

In January 2016, Des was diagnosed with the extremely rare disease Lymphangiomatosis, or GLA (General Lymphatic Anomaly), which affects his lungs, chest and other vital organs. Des is the only known patient in Ireland with the condition, which strikes one in fifteen million of the population.

Des needs to fundraise at least €120,000 for the operation, which can only be carried out in Philadelphia by a team of world class surgeons.

Des told the Tipperary Star that it's a daily uphill struggle to survive. Unfortunately, his health insurance company won't pay for the operation as it is outside Europe. All the European Doctors Des has contacted, have directed him to Dr Itkin, of the Children's Hospital, Philadelphia.

So rare is Des' condition, that it is often misdiagnosed. But without a daily cocktail of pain relievers, and constant hospital visits to drain his lungs, it's feared he could quickly succumb, and die from his ailment.

In 2004, Des had to have two large cysts removed from his neck: at the time he seemed to be in the clear, but in 2015, the first warning signs appeared that all was not well. “I was in and out of the Doctor's, and he sent me to Kikenny, to have a camera put down my throat.” All through 2015, Des was short of breath, and suffered aches and pains. “Things were not improving. When I lay down at night, there were all sorts of noises, crackling and popping... I was breathless. I couldn't even walk.”

More scans and X-rays in Kilkenny revealed gallstones, inflammations, and fluid in his chest.

By sheer luck, Dr John Faul, one of the best Respirologists in the world, recognised the rare condition from his work in the United States, and recommended that Des urgently seek surgery there.

Des, who works in Autobody in Urlingford, has three young daughters: Jessica (15), Michelle (8), and Emilia (1). His mother, Catherine Purcell, is well known in Gortnahoe village, where Des moved in 1999 from Dublin.

“There is no known cause for this condition, and no known cure,” says Des. “You've just got to treat it as you go along. I have it in the bones as well. My pelvis has thinned out.” The ailment “is like acid, in that it eats the bones away.” In his weakened state, Des also contracted pneumonia.

In September last year, Des was transferred to Dublin to undergo major surgery. Doctors drained out fluid through his back, offering him instant relief. But four weeks later, his body had filled up with fluid again: in St Vincent's Hospital, Doctors had to re-inflate one of his lungs, and release more fluid into a bucket. Surgeons performed keyhole surgery, but even experienced Surgeons had “never seen anything like it”. Des' lungs were covered in a “thick paste, almost like tar.” Enough fluid came out of Des' body to fill nearly a half-litre container every day, over a period of five weeks.

In daily agony, Des lost 10kgs in weight, with sore ribs, abdomens, and lungs. Following the operations, Des can now hardly walk 30 yards, and is on three strong pain killers, twice a day.

Des needs to reach his €120,000 target before he can undergo the US surgery. The fund now stands at €11,000 but he hopes he can reach that target before his health deteriorates even further. “We're organising a race night at the dog track in Thurles,” says Des, who faces his illness with stoic determination. The fluids are compressing his organs, but the American doctors are sure they can return him to health if they're only allowed to operate.