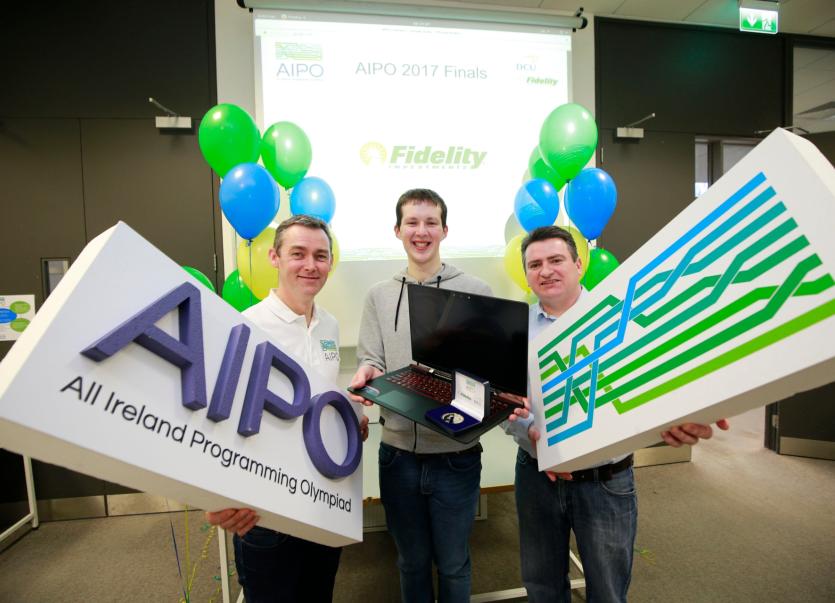 A 17 year old St Josephs College Borrisoleigh student has won an award at the national programming championships held in DCU.

Thirty three students from across Ireland took part in the Fidelity Investments Ireland sponsored event. Following qualification through an online programming assessment each of this year’s finalists had to crack the codes for eight algorithmic puzzles.
John, a category winner at this year’s Young Scientist competition claimed his first senior crown while Kieran Horgan, a 16 year old student at Davis College, Mallow, Cork took home silver and Oisín O’Duibhir (16) from Scoil Mhuire Agus Íde, Limerick claimed bronze.
In the Junior series, Suneet Mahajan (14) from Douglas Community School, Cork claimed first place followed by Oisín Davey, Summerhill College, Sligo in second place with Finbar Giusti from Sandford Park School, Dublin 6 in third.
Suneet Mahajan was also joined at this year’s finals, by his sister Ayushi, who at eleven years of age, was the youngest competitor.
The AIPO finals attract the very best young coding talent in the country with all of the finalists self-taught in the skills of computer coding to the level of a second year university student.
This year’s top eight senior finalists will now enter the Team Ireland selection phase.
Over the next six weeks, they will participate in weekly online competitions, with a view to competing for a place on the Irish Programming team which will represent Ireland at the prestigious 29th International Olympiad in Informatics (IOI 2017).