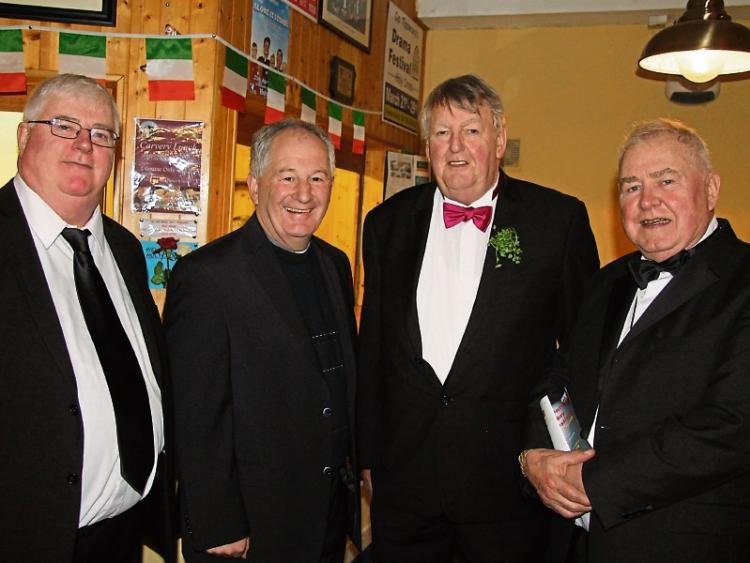 It was officially opened by International Festival Adjudicator, Mr Larry McCluskey, who, said Mr Donal Duggan, Festival Director and MC, “created a record by being on his fourth visit to Holycross as an adjudicator for the Tipperary Festival and we are delighted to have him back”.

Mr Larry McCluskey, speaking as Gaeilge and in English, said he was “delighted and priviledged” to be back again in Holycross and he paid tribute to Mr Duggan and the quality of the plays in the festival. Not only do Holycross host the Festival but they compete nationally as well and very successfully, he said. He paid tribute to the audiences who were very perceptive and appreciative.

Festival Fever is particularly strong in the Suirside village currently as the local group have ensured entry to the All-Ireland Finals in the Confined category next month in Tubbercurry, following three Festival wins which saw them also secure six Best Actress awards, including a Best Actress hat trick for Joanne O’Neill according to Holycross /Ballycahill Director, Claire Ryan, Festival Chairman, Tommy Lanigan and Mister Theatre in Holycross and Set Designer Supreme, Andy Slattery of the Festival Committee. The all-conquering Holycross/Ballycahill group, directed by Claire Ryan, comprises of the formidable cast of Joanne O’Neill, Jacqui Lacey and Patricia Lowry and a top class backup team. At time of writing they still had more festivals in which to compete to bring them possibly more awards in this so very successful year for the talented Abbeysiders. There is unprecedented excitement about the group locally and a record attendance is expected next Friday night to see them on stage. Early attendance is certainly most advisable. As Tommy Lanigan declared “there is a lot of Buzz about our play this year”.

And, indeed, Tommy pointed to the fact that a number of other groups in this festival, in both the Confined and Open Sections, have also qualified for the All-Ireland Finals in Tubbercurry and Athlone respectively. Simply only the best groups take to the stage in Holycross! Holycross/Ballycahill will be in the Tubbercurry All-Ireland Confined Festival Finals April 21-29.

The Festival Club and Tea Room will be in operation nightly.

Plays and Players for the rest of this week: