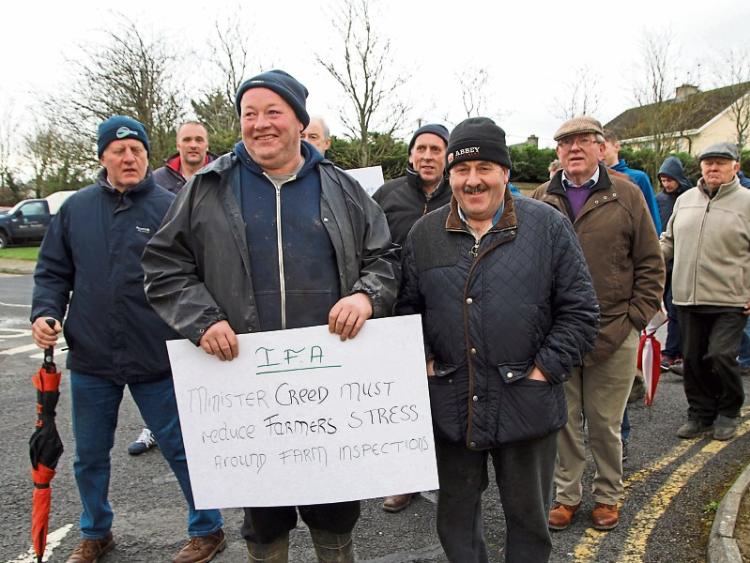 IFA North Tipperary Chairman Tim Cullinan led a protest outside the Department of Agriculture offices in Nenagh over the high levels of inspections in the region.

Mr Cullinan said the farmers had looked for a meeting with the Department to discuss inspection and penalties but had been refused.

Mr Cullinan revealed that 53 per cent of farmers in this region received fines and penalties subsequent to inspections. The average for the rest of the country is 39 per cent. He said this was an intolerable situation.

Meanwhile, a commitment was later given that a senior Department inspector will meet a delegation from IFA this week to discuss the penalties and inspection rate for North Tipperary.

The demonstration by Tipperary farmers over inspections has been backed by the Irish Natura and Hill Farmers Association. The INHFA said that they had raised the same concerns in the past year.

NHFA National Chair Vincent Roddy outlined how the INHFA have made repeated calls for reform of the Inspection and Appeals Process and stated how “plans to reform this has being included in the Program For Government but as of yet nothing has happened.”

This, added Mr Roddy, “is something that has to change irrespective of any objections from Department staff”,

Referring to the O'Connor case regarding land eligibility Mr Roddy pointed to serious deficiencies highlighted by the judge which the Department needed to take on board.

Of particular concern, he said was the absence of a control report and their inability to follow basic fair procedure.

Following this High Court decision the INHFA called for a full reform of the Appeals Office to ensure real independence and an appropriate route to the courts if procedures are not followed.

Mr Roddy stated that the current situation must change.