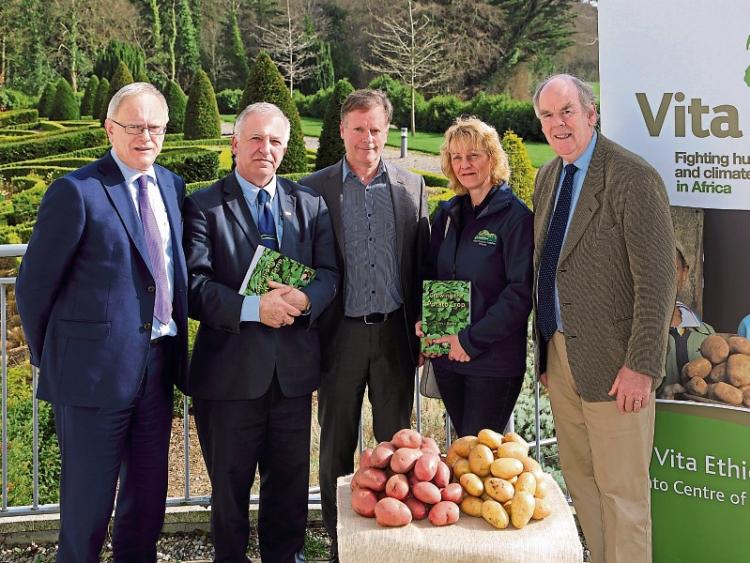 The book, which is expected to be a significant game changer for potato farmers in East Africa, focusses on improving potato productivity in sub Saharan Africa.

Effectively it is a training manual for farmers, crop specialists, agronomists and extension workers across the region and beyond. It provides practical guidelines to improve crop productivity, combined with an astute application of the scientific principles underpinning those guidelines. It is based on John’s own expertise, accumulated through his vast experience of working with Teagasc, Vita and the potato farmers of Ethiopia and Eritrea.

Through John’s expert guidance, over 12,000 farmers in East Africa have already seen their yields increase by 300% on average, while the programme is now being rolled out in five more sub Saharan countries.

“Teagasc is very proud to have collaborated with John Burke and Vita on this book,” announced Professor Gerry Boyle, Director of Teagasc, at the launch. “It will have an enduring impact long after we have all moved on. It is a vital tool in combatting poverty through sound, informed, research – led agriculture.”

The printing of the book was sponsored by well - known potato grower John O’Shea from Iverk Produce in Kilkenny who has been a key driver of Vita’s potato programme from the start in 2011, alongside other members of the Irish Potato Federation.

Asked why he was so engaged in the project, John O’Shea replied: “Nothing gives me greater pleasure than to see the joy on a farmer’s face when he harvests his crop, and sees that by following some simple steps he can improve his yield from four ton per acre to twelve ton per acre.”

John Weakliam, CEO of Vita, said; “Vita has been very lucky to have someone of John Burke’s calibre so deeply involved with our work, and indeed we are grateful to all in Teagasc and John O’Shea, who have both given unstinting support. This book will enable potato farmers everywhere to improve their situations and that of their families, and therefore, its value is almost immeasurable.”

John Weakliam took the opportunity to thank the University of Wageningen, who alongside Teagasc co-sponsored three PhD students. He also noted that the programme enjoys huge support from the Irish Government, through funding from Irish Aid.