Old school building continues as a place of learning for adults 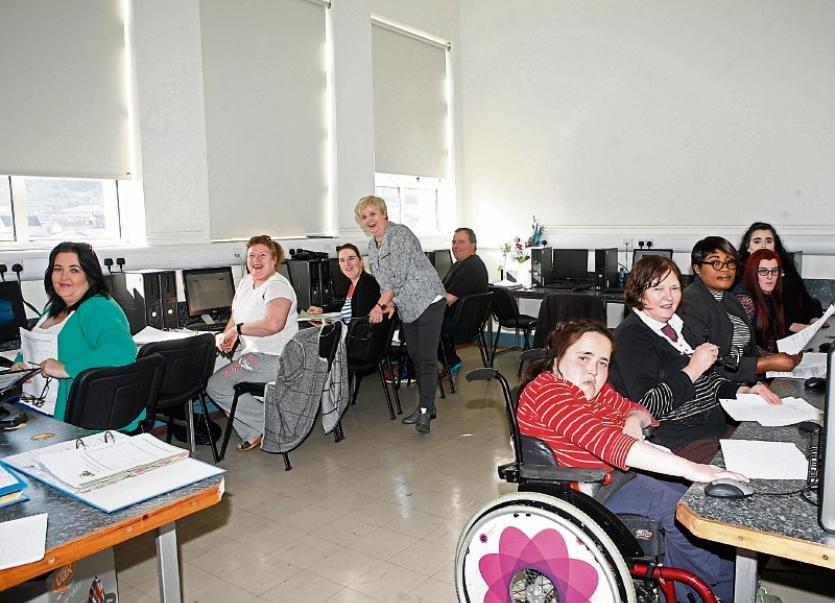 The old Comeragh College Community School campus at Greenside, Carrick-on-Suir is getting a new lease of life as a Further Education and Training Centre.

The hundreds of teenagers who once filled the corridors and classrooms of the 1 school may have flown the coop to a multi-million euro new campus on the town's outskirts but they have been replaced by adult students returning to education to improve their career prospects or to simply learn a new life skill.

Tipperary Education & Training Board's adult education and training courses in Carrick-on-Suir were formerly based at several different locations in the town including No. 45 New Street, the Nano Nagle Community Resource Centre and St Joseph's College at Greystone Street.

When the old Comeragh College building became vacant last year it was an opportunity not to be missed. The ETB set to work and after completing some renovations, it re-opened the former community school last September as a Further Education & Training Centre where all the town's adult education courses are now based.

The Centre was teeming with activity when The Nationalist visited on a recent Wednesday morning.

Information & Computer Technology tutor Ger Cullen, who grew up near the Comeragh College school, said it was great to see the building continuing to be used as a place of education. She believes a lot of people in the town of Carrick don't yet realise the Further Education and Training Centre is now based there.

Her students, who are studying for the QQI Fetac level 3 ICT Skills course, were busy at work in a computers room on the second floor. The course began last September with classes taking place two mornings a week.

The course is run by the ETB's Back to Education programme and covers such areas as computer literacy, the Internet, digital media and communications. Gerri describes it as a starter level course in computers and students who successfully complete it can progress to studying a Fetac Level 4 ICT course at the centre.

Ann Cleary from Carrick-on-Suir was a computer novice before doing the course and is now planning to continue her studies at Level 4.

"I never did computers before and I am enjoying it very much. I have learned an awful lot more than I thought I would and you get to meet new people as well," she sid.

Fellow Carrick-on-Suir student Ann McGrath signed up for the course after she lost her job last year. She shied away from using computers before doing this course because of her lack of knowledge but that has now all changed.

"I hadn't a clue about computers and came in here afraid to touch the (start) button. There is so much to learn and it's very interesting. It's great to have done this and it has definitely given me more confidence," said Ann, who is now back working again.

Lone parent Diane Cooke said the course's morning classes suit her because they are on while her children are at school.

"I knew a little bit about computers from using my phone but we are after learning an awful lot such as how to compose emails with attachments, and I do a lot of stuff now on the lap top with the kids. "

Apart from learning a new skill, she regards the course as an opportunity for her to get out of the house for a few hours. "There is a lovely group of people here. I would love to do further training as I haven't worked for years."

Mother and daughter Elizabeth and Evelyn Morrissey from Mullinahone were doing the course together.

Evelyn, who is a wheelchair user, previously did some computer training in Waterford and has found the course useful in helping her to look up information on the Internet, sending emails on her tablet at home and also increasing her overall confidence in using computers.

Last month the students in Gerri Cullen's course and other courses at the Centre hosted an information coffee morning in the canteen as part of Aontas Adult Education Festival Week. They displayed their course work and were joined by family and friends who came to see what the Centre was all about.

On the day The Nationalist visited, students from the ICT Level 4 course were taking a mid-morning coffee break in the Centre's canteen.

Among them was 80 years-old Alice Wall from Cregg, Carrick-on-Suir, who was one of the finalists in the Golden IT category of the Silver Surfer Awards in Dublin last week. The awards recognise the achievements of older people using computer technology.

Alice has studied ICT at the ETB's Further Education & Training Centre in Carrick for the past four years. She has received four certificates and is finishing her fifth course.

She was introduced to computers by her late son Jim, who sadly died of cancer a few years ago. He purchased a computer when he was moving to Sweden with his family so she could keep in contact with them through Skpe and emails.

She started doing the classes to learn how to use the computer and hasn't looked back since. She now uses the computer to keep up to date with news and pay her car and property taxes.

"When my son died I was going to give it all up but then I thought he had bought the computer for me and I should make use of it."

So she returned to her computer training and has found attending the Centre for courses two days a week helped her cope with the loss of her beloved son. "That is what kept me going after he died. I had to come here and meet people. I look forward to coming to the classes. I am a bit slow at times but my tutor John O'Driscoll is great."

Alice also paid tribute to the help she received from her former tutor ICT Marie Clancy, who nominated her for the Silver Surfer Awards.

The QQI ICT courses are among a range of Back To Education Initiative part-time courses for adults run at the Centre. (See accompanying article for information on other courses at the Centre).

There are also plans to have the ETB's Adult Guidance & Information Service available for adults seeking guidance on training and education opportunities at the Centre one day a week in the near future.

For further information on courses available at Carrick-on-Suir's Further Education & Training Centre log onto www.fetch.ie and http://tipperary.etb.ie/further-education or telephoning, Tipperary ETB in Clonmel at (052) 6134105.