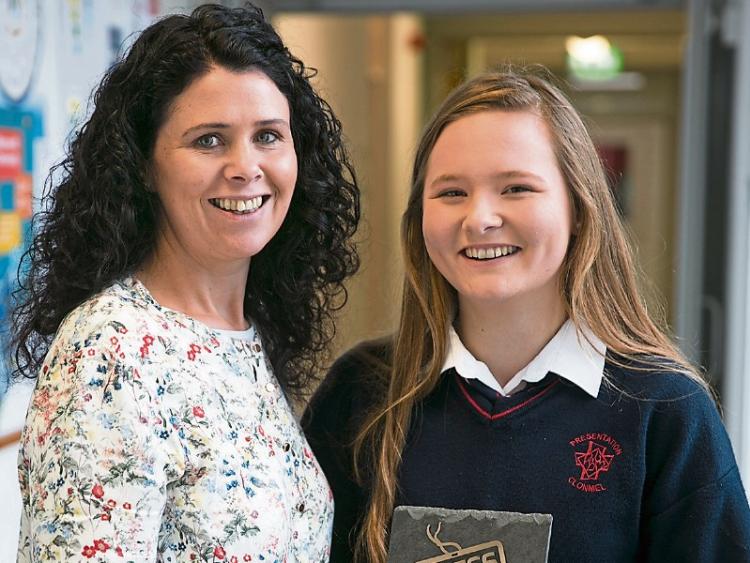 The awards, which are now in their fifth year, seek to improve literacy and critical thinking skills while helping students to develop a deeper understanding of news media and how it communicates about the world around them.

8,000 Transition Year students took part in this year’s initiative and 16 of those students were rewarded for their original journalism, created as part of the NewsBrands Ireland Newspapers-in-Education programme.

Natasha was awarded third prize in the Features category for her article on Dementia entitled ‘I am Still Me’.

Speaking about the article, the judging panel said: “Natasha’s cleverly assembled piece used factual graphs to illustrate her point and, in our opinion, was spot on by not turning this into an interview-driven essay.

The author’s own experience working within the Le Chairde organisation was enough for her to get a grasp of how difficult it can be to both live with dementia or live with someone with dementia.

She finished the article with a beautiful quote: “They may forget what you said but they will never forget how you made them feel.”

Finian McGrath, Minister of State with special responsibility for Disabilities, attended the awards and presented students with their awards.

“Newspapers have a vital role to play in any free society", he said.

"They are watchdogs, chroniclers and the eyes and ears that go where most cannot be. Press Pass is a wonderful initiative that promotes literacy and critical thinking skills by bringing newspapers into classrooms and encouraging students to study them in depth".