Minister needs to come to his senses

Independent Tipperary TD Mattie McGrath launched a major broadside in the direction of colleague Michael Lowry over the Bord na gCon controversy, accusing him of trying to shift blame.

Independent TD Mattie McGrath has called on the Minister for Agriculture, Food and the Marine Michael Creed to immediately engage with members of the Irish Greyhound Owners And Breeders Federation (IGOBF) in an attempt to resolve the ongoing crisis within the greyhound industry. Deputy McGrath was speaking after calls have been made for the removal of the entire Irish Greyhound Board:

“This crisis is being made worse by the refusal of the current Board, who were appointed by the Labour/Fine Gael government, to listen to the frustrations and the concerns of the ordinary members. We have defenders of the Board, like Deputy Michael Lowry, attempting to shift the blame on to members and to insist that the problems are simply down to misunderstandings over the role of the Irish Greyhound Board.This is utterly nonsensical and will be seen for the condescending viewpoint that it is. 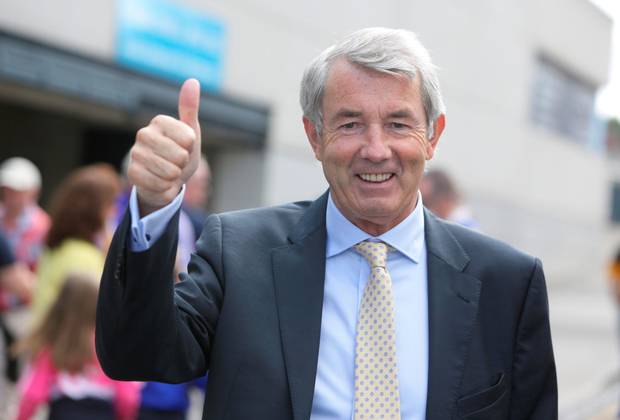 Thumbs down for Michael Lowry from Deputy Mattie McGrath.

Deputy McGrath continued, "The rank and file greyhound breeders and owners know their industry just as well as the apparent experts on the Board. They can see what needs to be done and they should be listened to. A change of the existing governance arrangements will go some way toward addressing these concerns as it will be the first indication that the priority is not simply to maintain the status quo and the interests of the Board, but to put the good of the industry first.

"We cannot allow this situation to deteriorate any further. The Minister and indeed the Board and its defenders must come to their senses and take account of the unanimous votes of no confidence that occurred in the meeting at the Horse and Jockey on this issue in March,” concluded Deputy McGrath.