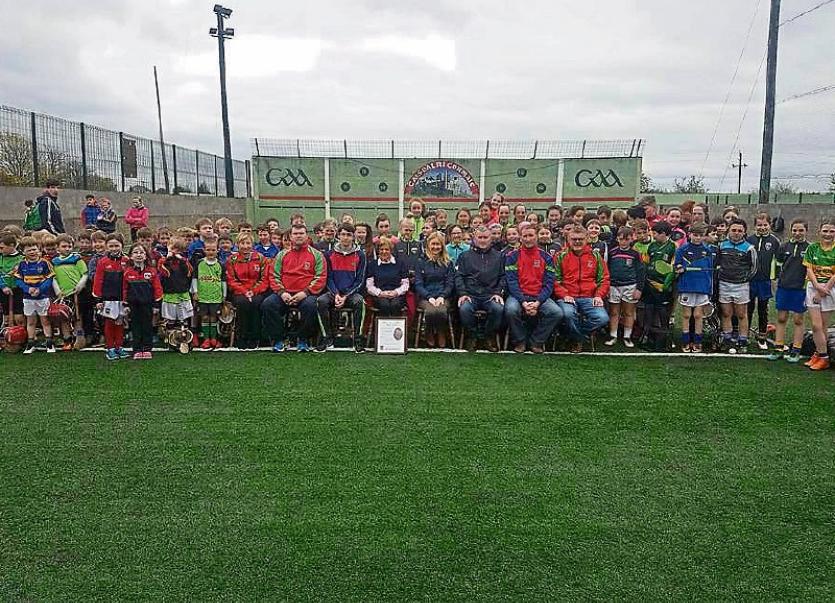 This year's Club Easter Hurling and Football camp was yet again a huge success with just over 100 kids taking part.

This year the camp was named in memory of the late Jimmy Ryan, the Rock, Cashel.

Jimmy played on many Cashel teams right through the juvenile ranks and then onto Junior level where he was the cornerstone of many a Cashel success. Jimmy's Mam, Jenny, brother Donal and sister Yvonne and nephew Sean were present on the final day of the Easter Camp. Donal addressed the large attendance with some lovely words, rekindling memories of Jimmy's time playing with club. He encouraged all the young boys and girls to continue preparing hard at training.

He remarked there was a "good buzz" about the club in the aftermath of last seasons successes and wished everyone well and Cashel KC continued success into the future. The club in turn presented the Ryan Family with a small token to mark the occasion by juvenile Chairman Sean O'Donoghue.

Thankfully the three day camp was rain free which is always a big help and the kids all had great fun and games and of course found time to fine tune their skills.

A big thanks to the Ryan Family for kindly treating all the kids to some goodie bags which was certainly well received. To Kevin Hally and Dinny Maher for their support throughout and for presenting each participant with a football and sliother. To the coaches for their time and expertise.

Also to Seanie and Justin and their Juvenile Committee for their time in organising the camp. Also to Graham and Anthony for having the pitches and facilities in mint condition. Its fair to say that once again this camp and many previous ones wouldn't have been possible were it not for the trojan work by Eileen.

Once again Eileen planned everything from beginning to end, with everything sorted to the finest detail. From the club and on behalf of all the parents and children, Eileen we extend our thanks and gratitude, without you none of this would have taken place.

And so camp 2017 comes to an end and we look forward now to a season of hopefully continued success and enjoyment.

Best wishes and a great Easter to all our young players, members, officers and supporters. From all at Cashel King Cormacs.