Big turnout of residents for Spring Clean at Drumdeel

Neighbours drop everything to pick-up litter 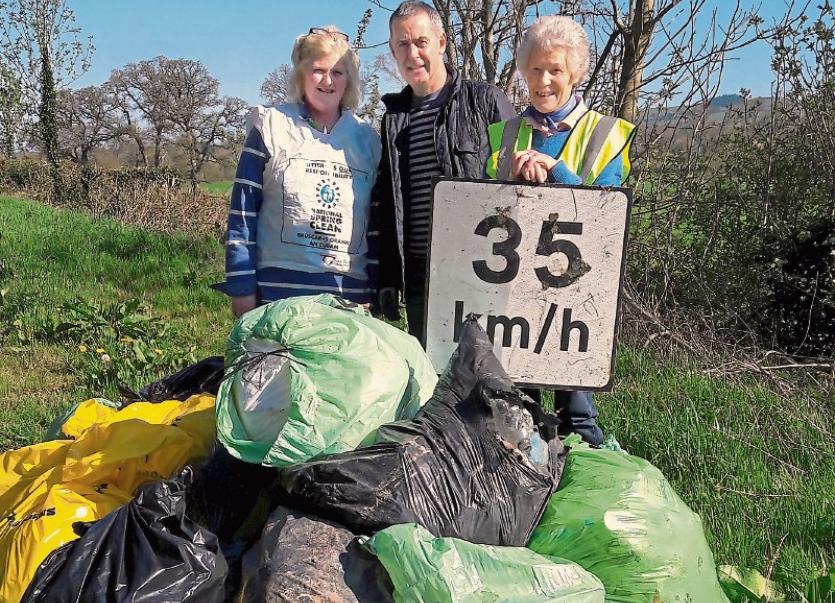 Recently, a large group of local residents from the Drumdeel area, met to pick up litter on the roadsides as part of the Spring Clean initiative championed by An Taisce.

This has become an annual event, as sadly fly tipping and dumping seems to be as bad as ever. The many black bags collected represent the huge amount of dumped waste, much of which could be recycled for free at the recycling centre on the Cashel Road in Clonmel.

The Spring Clean initiative is supported by local authorities who pick up the waste afterwards and by the volunteers who pick up large quantities of rubbish, much of which is pretty disgusting. Bags of rotting nappies anyone? Lovely!

Here are some interesting facts about waste, from An Taisce. Local Authorities spend tens of millions of euros every year on cleaning the streets in Ireland and trying to prevent people from dumping their waste illegally – an enormous amount of money that could be spent on better things! Estimates indicate that collecting litter is nearly ten times more expensive per tonne than collecting domestic waste.

Most products we buy and use cause greenhouse gas emissions in some way, e.g. during production and distribution. They also contribute towards exhausting our natural resources. Packaging takes energy to produce, therefore by cutting down on packaging production, and also through recycling, we can reduce the amount of energy used and limit the release of further greenhouse gases in to the atmosphere.

Your contribution during the National Spring Clean, however big or small, will have real and measurable benefits for our environment. For example: (a) For every aluminium can collected and recycled enough energy is saved to run your television for three hours! (b) For 1kg of recycled plastics collected, 1.5kg of carbon dioxide is prevented from being released to the atmosphere – the same amount of carbon dioxide released by toasting 30 slices of bread! (c) By recycling 1kg of paper instead of landfilling, enough energy is saved to run an energy-saving bulb non-stop for two days! For 1kg of recycled glass, the saving is 300g of carbon dioxide.