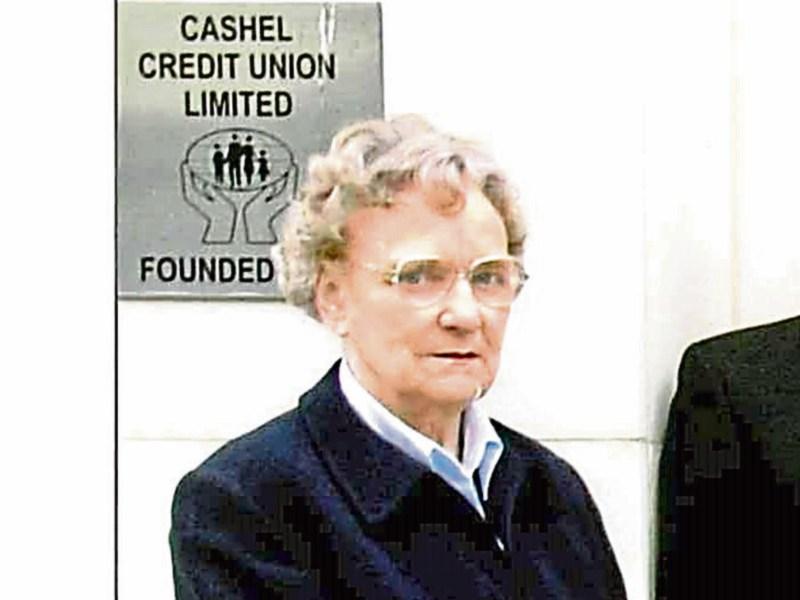 Cashel Credit Union staff and members are mourning one of its founder members who epitomised the very Credit Union philosophy.

The late Mary Crowe, Boherclough, Cashel,  was a founder member in 1967 and remained actively involved until just last month when she became unwell.

The Credit Union will celebrate its golden anniversary in November this year and Mary was with it for all but eight months of those fifty years.

Chief Executive Tim Molan has paid a glowing tribute to Mary on behalf of her colleagues and all the members she regularly came in contact with.

"She walked the walk", he said, in how she carried out her duties and her care and concern for members.

Her commitment was evident in how she couldn't live without the Credit Union.

After first working in the original office in Friar Street as a volunteer, she later joined the staff on a permanent basis.

Sometime later she retired but the retirement only lasted for a few weeks.

"She retired from her retirement", Mr Molan recalls, and returned as a volunteer once again, working five days a week. That work lasted up until the end of last month.

"Retirement just wasn't for her", he recalls.

Mary worked on insurance claims, regularly dealing with people suffering bereavement, and she did this with great sensitivity and caring.

She was also a great innovator. Credit Unions, like most businesses, underwent many systems and technology changes over the years, and Mary adapted to and embraced them all.

"She was a real leader", Mr Molan remarks

She also had regular contact with staff in other offices and was hugely respected by them. Front counter staff at the Cashel office have been receiving expressions of sympathy from members since her sad passing.

And as a mark of respect, the office will be closed on Saturday, the day of her funeral.

Mary was the beloved wife of the late Paddy and sister of the late Michael and Gretta. She is deeply regretted by her loving sister Breda, nephews Sean, Pat and Adrian, niece Majella, grandnephews, grandnieces, relatives, neighbours,  and her colleagues at Cashel Credit Union and many friends.

Reposing at Devitt’s Funeral Parlour on Friday evening from 5.30pm with Removal at 7.30pm to St. John the Baptist Church, Cashel.

Requiem Mass on Saturday at 10.30am followed by Burial in the adjoining cemetery.