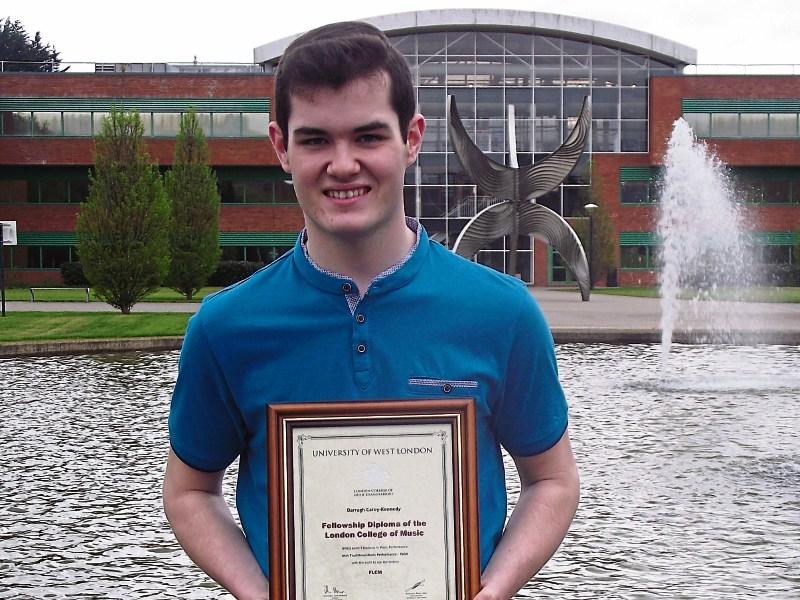 A well known young musician from Roscrea has been awarded the The London College of Music's highest diploma, in conjunction with the University of West London.

Darragh Carey-Kennedy has been awarded a Fellowship in Irish Traditional Music Performance, with the right to use the letters F.L.C.M. after his name.

Although it is not yet confirmed he could be the youngest candidate to have gained such an achievement as Darragh had only turned eighteen year's of age when he undertook the exams.

The exam consisted of a written submission describing each piece of music to be performed.

He also had to outline each tune title, the sources relating to the tune, historical content and any other information which was relevant to the piece.

It was also required to include a short biography of the candidate.

All information had to be accurate and grammatically correct. the entire written submission also had to be aesthetically pleasing.

The musical performance consisted of a 45-minute stage performance to the standard of a professional musician utilising all types of tunes in the traditional mode of playing, introductions and background of tunes.

It would be similar to a fourth-year undergraduate's final exam.

This is the fourth and last diploma exam in the Diploma cycle of the London College of Music.

Darragh has completed all four receiving exceptionally high marks in each undertaking.

He prepared and presented himself for all diploma exams.

The London College of Music is renowned Worldwide and its diplomas and awards are envied and respected in the music world. Darragh is a leaving cert student in Colaiste Phobal Roscrea, He hopes to pursue a music themed subject in third level.

This exam was very time consuming involving much research and practice, Darragh has to be complimented on his achievements considering the workload he undertook. He is also close to completing his piano examinations.