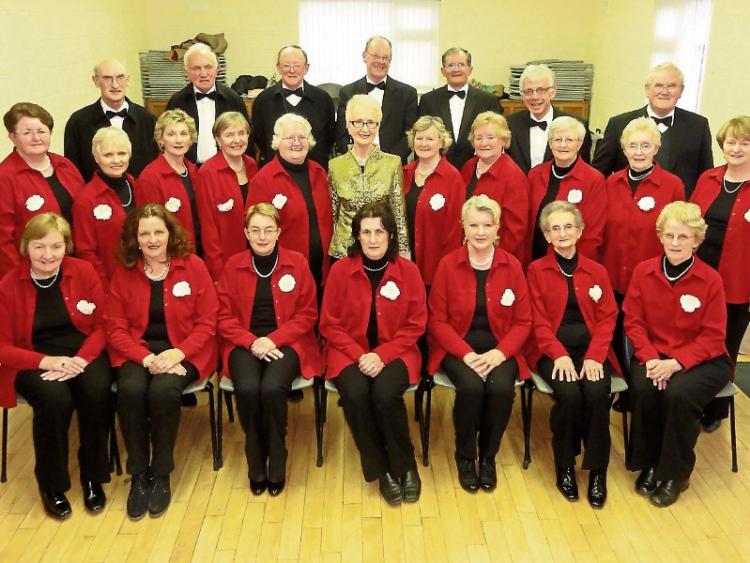 The Tipperary Singers are hosting a concert  next Sundayin Aherlow House Hotel to celebrate it's 45th birthday.

It has been an amazing journey through four and half decades since starting way back in 1972.  It was then Betty Lynch was asked to get a small group of singers together to participate in a fund-raising cabaret in Clanwilliam Rugby Club.

From very humble beginnings this small group went on to form a 4-part choir that sang in many festivals and concerts both at home and abroad.  They fund-raised throughout the years helping communities and organisations to flourish.  In 1993, the year when our television screens carried appalling scenes of horrendous suffering of the people of Sudan during one of the worst famines in the history of mankind, the choir became involved with Concern and since then, have annually organised the Church Gate Collection in Tipperary.  Those appeals have always been met with the utomost  generosity of the people of Tipperary throughout the years .

It has always been the motto of the choir 'to sing for joy and in so doing, bring a little light into others' lives.

In the month of April 1972 that 'little group' sang for the first time and were named "The Tipperary Singers".  Thus, it is most appropriate to celebrate their 45 years on the last day of April 2017.

The renowned composer and conductor, the late Philip O'Laoghaire visited the fledgling choir in April 1973 with the now famous Michael O'Suilleabhan from Clonmel.  The choir were preparing to participate in the Cork Choral Festival for the first time and one of their songs was a Philip O'Laoghaire composition "Pe nEirinn i."  At that time they rehearsed in the Vocational School on Main St. Tipperary, (later to be known as 'The Irish House.')  That night O'Laoghaire said, "we in University College Cork, are endeavouring to start up Choral Groups around the country and tonight, it gives me great pleasure to help and encourage you in your work.  What you may not realise is, that you are a spark of light in the darkness that will lead the way for others to follow."

And so, next weekend the choir will be joined by a wonderful array of talented artistes to celebrate this great occasion.

Tickets €20 available at Kingstons' Shoe Shop, ryan's Music Shop, all Choir Members and at the door on the night.  Donation from proceeds to TIPPERARY HOSPICE.