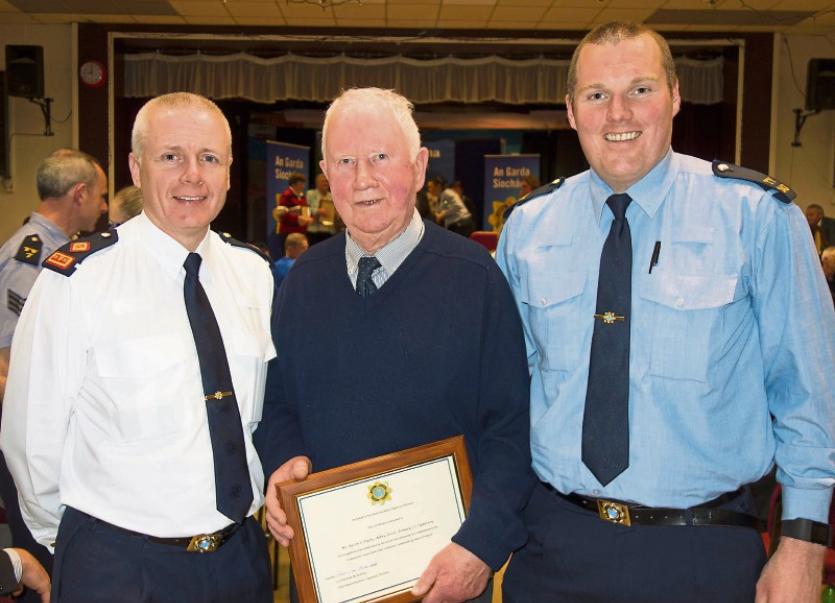 Community activists from around the county were  honoured at a Tipperary Garda policing seminar in Cashel.

Cahir district officer Supdt. Paul O'Driscoll paid glowing tribute to all those who play such a key role as volunteers in their own community.

Crime prevention in communities was a key focus of the event in Halla na Feile where Supdt O'Driscoll, Community Policing Officer Inspector Eddie Golden, and Crime Prevention Officer Tom O'Dwyer told those present of how to stay safe in their homes, farms and  businesses.

Supdt O'Driscoll reported that there had been 125 fewer crimes in Tipperary than last year and that 44% of them had been solved.

Supdt O'Driscoll said they want to prevent crime in the county with pro-active and intelligence-led policing.

He paid glowing tribute to the community volunteers who work selflessly on behalf of their communities.

Austin O'Flynn, Fethard, who has been a major contributor to the arts and entertainment scene in his home town over numerous decades; a founder member of the Community Council; and very active in Fethard Voluntary Fire Brigade.

Breeda Hewitt, Clonmel, a founder member of C-Saw, a group committed to reducing the number of suicides in South Tipperary.

Marie Hally, Cashel, a driving force behind Community Alert in the town.

Francis Murray, Cloughbreeda, Cahir, who is very involved in all community organisations, including Tidy Towns and Meet and Train, described as the 'go to man' in Cahir.

Thomas Harvey, Nenagh, unit commander of the Nenagh Ormond search unit, which recently was deployed in the search for Rescue helicopter 116 lf the Mayo coast.

Derek Russell, Roscrea, who works tirelessly on behalf of the community in his home town.

Mary Langton, Nenagh, who instrumental in the installation of panic alarms in 88 homes.

Nancy Troy, Thurles, honoured for  her commitment to Text Alert;

Tommy Barrett, Thurles, an active member of the community across a range of activities.