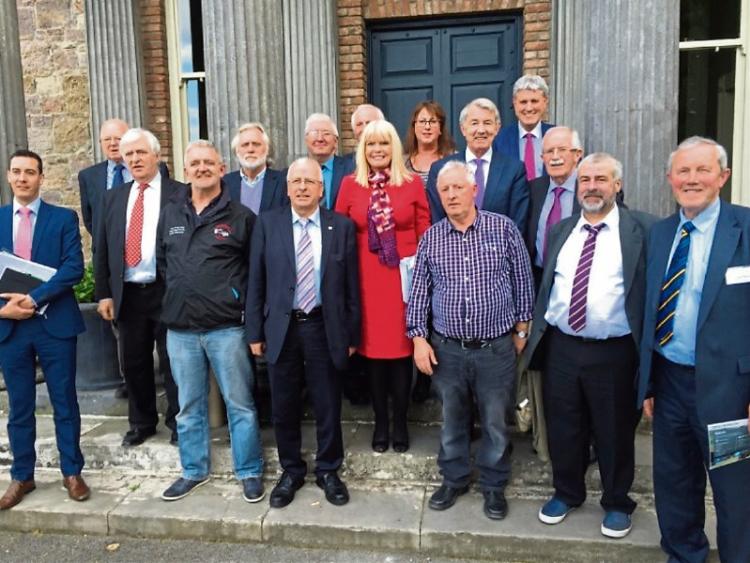 The Minister for Jobs, Enterprise and Innovation Mary Mitchell O’Connor held a meeting last week with nine representatives of the Jobs For Tipp action group.

Minister O Connor, who was in Tipperary to attend an Enterprise Ireland and IDA event in Kilshane House, met with JFT in a meeting arranged by Deputy Mattie McGrath.

Jobs for Tipp member Maureen Walsh outlined the purpose of the group to the Minister O Mitchell Connor and explained why they came together.

“Tipperary town is dying with many businesses closing down. We feel that the County Council has failed to address and come up with sustainable solutions for important issues that have affected businesses in the town that have resulted in closures. Jobs for Tipp have since initiated and held productive meetings with the IDA and Enterprise Ireland and going forward, we are preparing premises for IDA inspections and putting plans together.” said Maureen Walsh.

John O’Connor from JFT explained to the Minister why there is so much unemployment and why Tipperary Town has the highest rate of unemployment in County Tipperary.

“This is due to the constant closures of business and theamount of families on lower incomes or on Social Welfare benefits. ”

Jobs for Tipp’s Seamus Clarke spoke to the Minister of his sadness at the closure of three more business in Tipperary over the last week, of the crippling rates and how this is actively closing up our town centre resulting in the constant loss of jobs in the town.

“Tipperary Town and Carrick on Suir are the two towns that due to rate parity, had to increase the rates but these two towns are most in need of dropping the rate level since they are both unemployment black spots and both towns do not have the benefit of a bypass,” explained Maureen Walsh.

“The people of Tipperary town believe that we are the forgotten town and that no-body was listening to our plight,” said JFT Siobhan Hyland Ryan.

“We felt that no one was challenging the Government or our representatives for a long time and that jobs and factories coming to Tipperary were going to other towns. . The name Tipperary is known throughout the whole world and yet we as the county town do not even have a bus stop where busses can turn around and safely drop off tourists to walk around our town and visit the cafes or shops. Tourists are expected to walk up a steep hill not knowing where they are going with no Café facilities or toilets to facilitate them… the tourist busses just keep on going.”

“While we are delighted by the new development out near Dunnes Stores this will take some time before fruition and that we desperately need incentives now for already established shops and businesses in the town centre. We need to put the life back into the centre and not focus on the outskirts.” said Siobhan.

“Minister Mitchell O’Connor stated that the Jobs for Tipp group were so refreshing as they not only highlighted the problems and issues but are actively creating the solutions themselves,” added Siobhan Hyland Ryan.

She believed this scheme would benefit Tipperary as it includes initiatives in areas such as heritage, tourism, arts and culture, the re-use of vacant premises, energy efficiency and business supports. Minister Mitchell O Connor said JFT should should work alongside the Local Enterprise Board and also strongly suggested that Jobs for Tipp do not focus solely on the IDA but should look at grant aid to help already established businesses.

At the meeting Minister Mitchell O Connor remarked to the TD’s present that they have to help this group and that she wants to see solid actions taken by them.

Minister Mary Mitchell O’Connor launched the framework for Town Centre Renewal in April 2017 that sets out a practical step by step action plan for stakeholders to work collaboratively to enhance their local town or village. It will be a key support document for towns and villages applying for funding under the Town and Village Renewal Scheme and will play an important part in the work to rejuvenate and revitalise towns and villages around the country. The Framework supports the Government’s commitment to ensure that the benefits of sustainable economic recovery are felt in every part of Ireland.