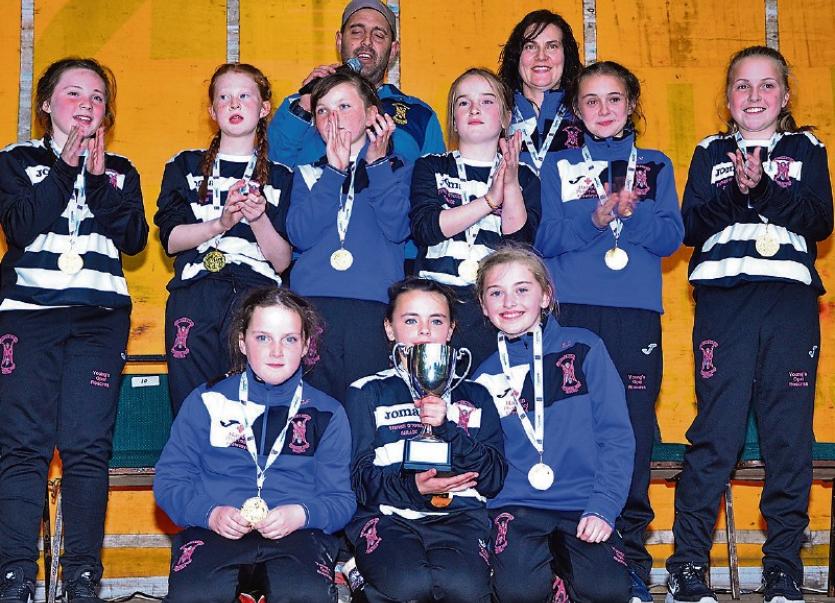 What a weekend it as been for Roscrea Community Games. It has been 20 years since two local teams struck Gold in the National Finals.

Back then, it was under 15 girls’ soccer and boys’ rounders. This time round, the girls’ soccer is still going strong with the U12 team shining bright and it was a first time for a Roscrea rugby team to take home the gold medals with the U11 boys showing how it is done!

While the teams were making gains on the sports fields, Edel Daly was making waves in the swimming pool. This is the third time for Edel to represent Roscrea and Tipperary at National level in the Freestyle event.

After placing second and taking home the silver for the last 2 years U14, it was clear that Edel was going to have her work cut out in her first year competing at U16 level but this only spurred her on even more. With true grit, determination and after numerous long training sessions, Edel rose to the occasion and swam a fantastic race to win in comprehensive style, claiming her coveted gold medal.

This is an amazing achievement for such a young lady to take home Tipperary’s only gold swimming medal at the 2017 National Community Games Finals. This was the first year for the National CG Finals to be held at the National Sports Campus in Abbottstown, Co. Dublin. Also the home of the FAI headquarters; this was a duly suitable venue for our U12 Girls to display their talents.

This was a very young team with only two players involved in the competitive sport at the start of this season. Mary Ryan and Brian Brooks joined forces to pass on their wealth of experience to these young players to prepare them for the games ahead. The team is made up of Carrie Fletcher, Leanne Doherty, Leah Ryan, Áine Dooley, Ceola Begin, Niamh o Brien, Ella Carey, Abi Vozza and Sarah o Toole who have clearly gelled well under the watchful eyes of Mary and Brian. To reach the National competition, the girls saw off challenges form Newport (8-0), Waterford (7-0) and Limerick (2-1).

The training intensified in preparation for the CG National finals and this was evident as they took to the pitch against a strong Donegal (Ulster) side. The girls put in a ‘Premiership’ performance, winning 3-2, setting up a deciding final with Burrishoole, Co. Mayo (Connaught Champions). While the girls played a stormer, the supporters really got behind them, pushing them all the way to the final whistle and these young ladies didn’t disappoint finishing off a fantastic championship, winning 2-1 and claiming their first National Title!

While the girls were displaying a soccer masterclass on one pitch, the boys were lining out on an adjacent pitch keeping some supporters fit trying to keep a view on both games. Again, this was a team of young men playing at the biggest competition of their lives. The boys under 11 rugby team were coached under the watchful eyes of William Hayes, Dave Pearson, Scott Fairbrother and Richard Loughnane and the team was made up of Sam Carey, Ben Carter, Billy Hayes, Harry Loughnane, Josh Loughnane, Aaron Moloney, Calum Murphy, Kienan Murphy, Ben Pearson, Ryan Stone and Sean Stone. When you visualise a Munster or Leinster rugby game where big men use their strong physical prowess coupled with intelligent strategic play to outscore their rivals, it is difficult to relate this to 9 & 10 year old boys but by all accounts these young Roscrea men performed superbly, keeping their coaches and supporters watching in awe as they claimed their first National title. This team saw off stiff competition at both County and Munster level to reach the National finals and after a 5-2 win over a tough Cavan team (Ulster Champions), it was all to play for against the Leinster Champions (Two-Mile House, Co. Kildare). Both teams were up for the final match, with a level score line at the end of full time.

The hunger continued in to extra time but the Roscrea boys were not giving up without a fight and after a nail-biting finish, the boys won out with a 3-2 victory! Other competitors representing Roscrea and Tipperary at the National Finals were Dayle O’Meara and Michael Fitzgerald who competed on the Tipperary Mixed Distance Relay. The boys ran very well but were unlucky to miss out on a team medal on this occasion. No doubt, these boys will be back there again. This has been a fantastic Games for Roscrea CG bringing home all of Tipperary’s 3 National Titles to our small town.