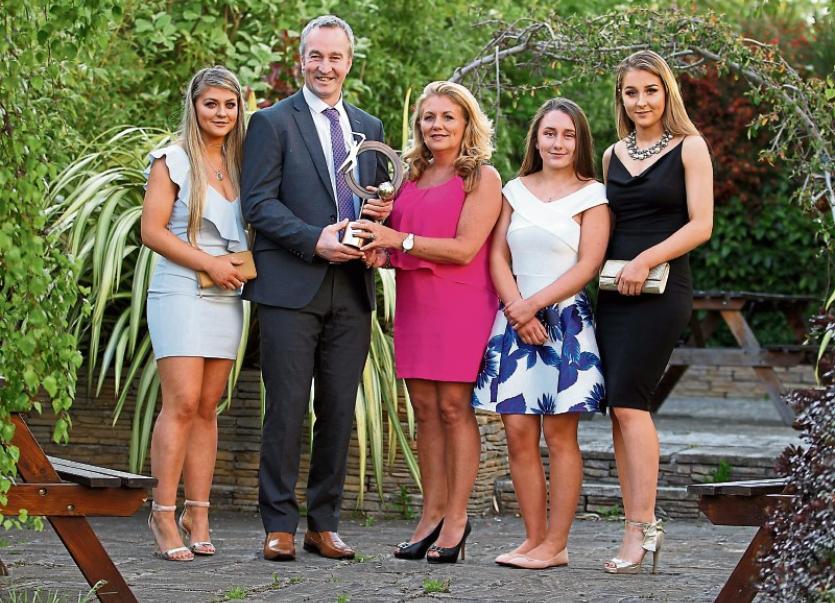 Words such as joy, ecstasy and exhilaration could not fully describe the sense of happiness, pride and satisfaction enjoyed by all Tipperary people last September, the President of the Tipperary Association, Dublin, Mr. Liam Myles stated on Friday night.

He was speaking at the Association's Annual Awards for 2016 when the Tipperary Person of the Year Award was presented to Michael Ryan the Tipperary senior hurling manager.

Mr. Myles stated that the Upperchurch-Drombane man, along with his excellent management team, led Tipperary to the holy grail of hurling in 2016 when the premier county came out on top of the great Kilkenny team.

“The performance of the Tipperary senior hurling team in 2016 was a revelation and the campaign brought tremendous joy, excitement and pride to all Tipperary followers. Ryan’s Tipperary cut a swath through the Munster Championship with style and skill but most of all with the steel of old which he brought to bear on the field of play. Tipperary notched up huge scores in Munster and faced up to a Galway team in the semi-final for the second year in a row. Thankfully, and after a very hard fought contest, Tipperary came out of that game with the narrowest of victories, reversing the tables on Galway from 2015”.

Mr. Myles said the final was the one all hurling fans wanted with the “flying” Tipperary taking on the cats for the All-Ireland title. Tipp hit top form in the final and there was no doubt about the outcome well before the finish. “The spoils were ours and Liam McCarthy was on his way back to Tipp!”.

“Michael showed that he learned from being involved with previous management set-ups and he brought these skills to the forefront. He played a key leading role in the success of 2016. There is no doubt but his contribution was vital and crucial in getting Tipperary over the line to win back the McCarthy cup after 6 years”.

The Association President said a significant factor in the success of the 2016 campaign was the introduction of some new players who became giants overnight in the blue and gold. “Credit to Michael Ryan and his management team for that alone. To achieve an All-Ireland title requires a huge effort on the part of many. The commitment above the call of duty from the County Board, the team management, the back-up team and players was clearly evident all year. The entire exercise was a team effort, so many strands, together with so many different talents, working with one dedicated purpose. To achieve what was achieved last season required that each jig saw piece be slotted in perfectly.

The man responsible for bringing all these strands together, for ensuring that those who wore the blue and gold were a credit not only to Tipperary, but to the great name of hurling was Michael Ryan”.

He added “There is no doubt that Michael Ryan achieved something very special in 2016. The joy, the ecstasy, the exhilaration – whatever words are used - could not fully describe the sense of happiness, pride and satisfaction enjoyed by all Tipperary people last September”.

Accepting the award, Mr. Ryan said he was deeply honoured to be "standing here before you. This award to be honest is a bit overwhelming", he stated.

He told the audience that they all shared the euphoria of Tipperary winning but, he said, he had been reading the list of award recipients over the last number years and while sport was hugely important and played a huge part in all their lives, looking at that list one got a sense of almost being overwhelmed by the quality, contribution and hugely important impact they had made on people's lives. "Yes sport is really important but within the context I am humbled and thrilled to receive it".

He acknowledged that he would take credit for having the neck to stick his neck out and make a decision to bring in three great guys with him. There would, he said, have been no All-Ireland without Declan Fanning deciding to stay on and, John Madden and Conor Stakelum coming on board. "That is the absolute truth and absolute certainty".

He also spoke of sport's influence on young people and said it should never be underestimated. "It has endured because it is a tradition, a fantastic tradition. It is one we were reared on, love of game, parish, county".

He stated that the code did not matter as long as one got to the highest level one could achieve.

"You are promised nothing, you have to achieve everything. You will lose more than you will win but you will make more friends than you will ever be able to count. It really is fantastic. To see the joy the success of 2016 brought to so many Tipperary people all over the globe, all over Ireland and the county was fantastic".

Referring to the 2017 campaign, he reminded people that they were absolutely guaranteed nothing but the team would give their all. "We all have high expectations of this team, possibly too high. The lads are aware of that very well but in sport you will have only one winner. We will do everything we can but I know you will support us to the bitter end. We will certainly fight it to the bitter end".

He paid particular tribute to Denise Murphy Stakelum, Lucy Fanning, Niamh Madden and his wife Carmel saying that the ladies had let the Manager and selectors indulge their love of hurling and allowing them to give their time to Tipperary. "It is something we feel passionately about. It is a short window but we will try and maximise it for as long as we can". He stated that things were very, very good in Tipperary. He looked forward to a great 2017 on all fronts in the county.

The Manager also expressed huge thanks to Louis Fitzgerald, who sponsored and presented the award, for what he had done for Tipperary teams down the years. "The welcome and care we get is constant and super. It is great to have that understated welcome and care coming from Louis. He is a serial supporter of all things Tipperary".

He thanked the staff of the Louis Fitzgerald Hotel and re-iterated that he was deeply honoured and "somewhat embarrassed to receive this award".