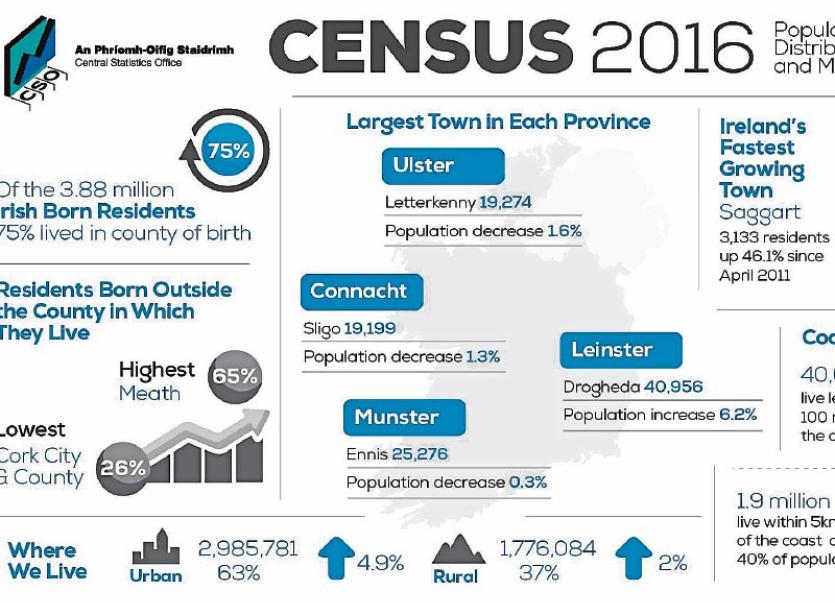 The Central Statistics Office today (Thursday) publishes the second in the series of 11 thematic reports from Census 2016 – Profile 2: Population Distribution and Movements.

• Clonmel, with 17,062 persons, was the largest town in the county. The fastest growing town in percentage terms was Newport, which experienced 10.5% population growth between 2011 and 2016.

• Nationally, Drogheda remained the largest town, with 40,956 residents, while Saggart was the fastest growing town, seeing its population increase by 46.1% between 2011 and 2016.

• Only 447 of the 2,697 Tipperary households who moved in the year preceding the census bought their new home with a mortgage or loan, while 1,830 rented their accommodation.

This report is accompanied by a set of detailed population by area tables, published on the CSO website, which provide the population for every settlement in Ireland for 2016 and 2011.

Deirdre Cullen, Senior Statistician, commented: ”Profile 2 provides information on the distribution of the population, changes in urban and rural populations, population density and internal migration. This is the second of our thematic census releases and sheds further light on how the population has changed over the past five years”.

Profile 2 is now available on the Central Statistics Office website at www.cso.ie/en/census.