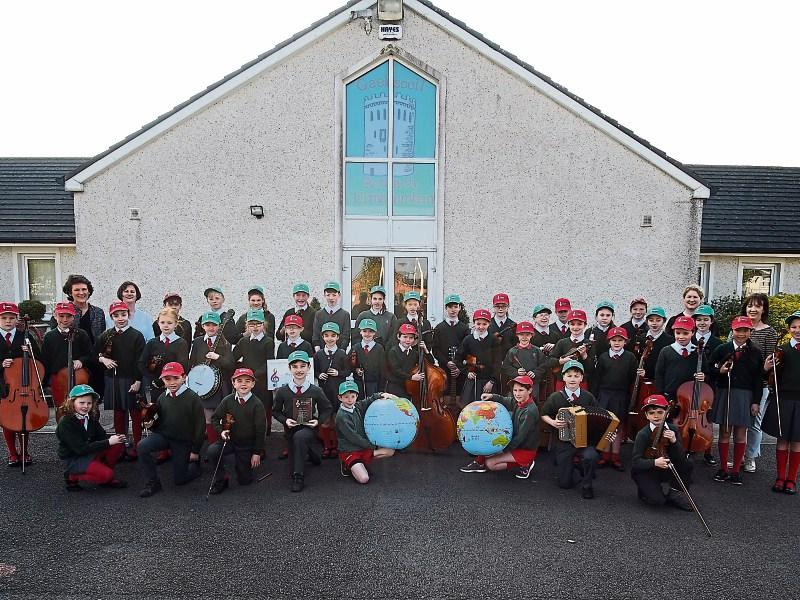 The musical talents of the pupils at Gaelscoil Aonach Urmhumhan have been recognised nationally with the school taking first prize in the Waltons Music for Schools competition.

The 40-strong group of musicians entertained the crowds in the National Concert Hall and won over the judges – Bill Whelan of Riverdance and Deborah Kelleher of the Royal Irish Academy of Music with their performance, Ar Scáth a Chéile – United We Stand, United We Play.

Only six primary and six secondary schools qualify for the finals. This is the third time that Gaelscoil Aonach Urmhumhan has qualified for the finals, coming third last year.

The school's success is a testament to the strong musical traditions within the school, developed and supported by principal, Inez Uí Éanáin and all the teaching staff. Every child learns the tin whistle, the weekly Banna Ceoil involves all children from Rang 2 to Rang 6 where each and every instrument is welcomed, junior and senior choirs sing for school occasions and a Chamber Orchestra has been up and running for the last three years.

Addressing this year’s theme, Music has no Borders, Grúpa Ceoil na Gaelscoile brainstormed the theme in the context of an Irish language school and decided to show how music transcends languages and genres in unifying children.

The winning piece begins with two separate groups – an Irish traditional and a classical group – playing and singing It’s a Small World in German, French, English and Irish. Two students, who start the piece as strangers come together during The Beatles’ I Want to Hold Your Hand. The classical group then plays Pachelbel’s Canon, and the traditional group responds with Eileen Ivers’ Canon Frolics. The two groups then unite to play The Farm’s All Together Now and finish with Seo Linn’s Ar Scáth a Chéile (Working Together), which includes African lyrics, and a fantastic display of Irish dancing from the school's talented dancers brings gave great energy and zest to the performance.