At the heart of the community 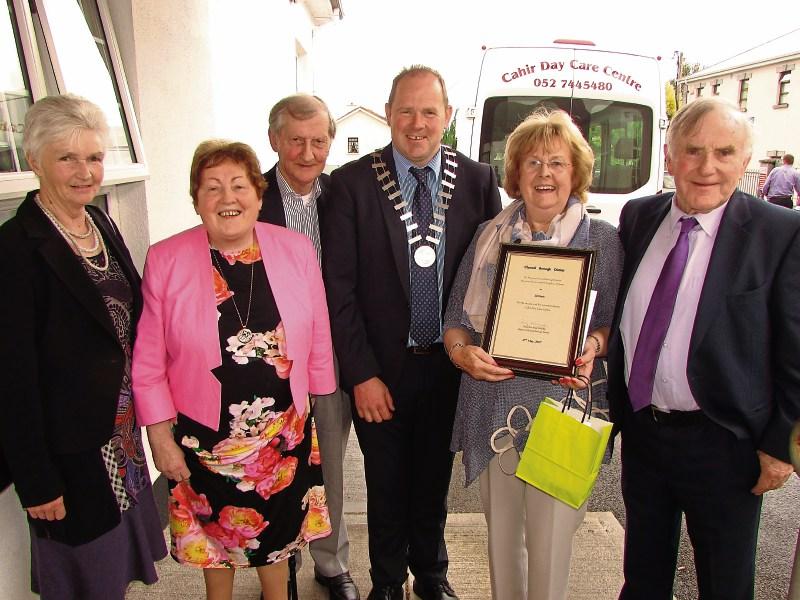 She will be missed in the busy halls of Cahir Day Care Centre!The wonderful Lil Davis has finally hung up her keys and retired from the community service at which she was the beating heart.

Speaking on the history of the Centre Peggy and Lil's time there Peggy said that it was on Tuesday, July 10, 2001 that the Cahir Parish Centre committed to the development of a Day Care Centre in Cahir. Members of that first committee were present on Lil's special day.

The new Cahir Day Care Centre finally opened its doors in May 2004 and was officially opened on the 20th October that year by Mr Sean Power TD. It was founded by a voluntary committee who recognised the importance of a need to provide care for the elderly in the community.

Lil Davis was recruited as manager from the start and for the past 13 years carried out her duties in a professional manner ensuring that the clients always came first.

Lil took a personal interest in the men and women who came to the centre, knew their likes and dislikes and tried to meet their individual needs in a caring way. She organised a variety of activities including painting classes, bingo, card games and trips away for groups and local musicians along with the Men’s Shed provided music sessions, dancing and singsongs and regular entertainment.

Peggy said that the Day Care Centre has gone from strength to strength and she believes that Lil has played a very significant role in that success.

Lil also played her part in the all important fundraising and with the help of many in the wider community last December it came to fruition when they raised enough money to get a new minibus.

Peggy sincerely thanked Lil for her commitment over the past 13 years, and said that she hoped that in her well-earned retirement she would look back with pride and satisfaction on what she have achieved and enjoy more time to do the things that will bring you joy and contentment in the future.

Lil received presentations of gifts and flowers from the Board of Management, friends, clients and centre staff. Lil also received a special certificate to recognise her outstanding service to the community from Mayor Cllr Andy Moloney.

Lil replied with by thanking her family, Peggy O’Brien, Bobby Condon and the rest of Board of Management for their commitment, kindness and hard work over the years, Cllr Andy Moloney, Mattie McGrath TD, Fr Bobby Power, Stefan Grace and all the musicians, Mary Guthrie and the dedicated staff and volunteers in the centre.