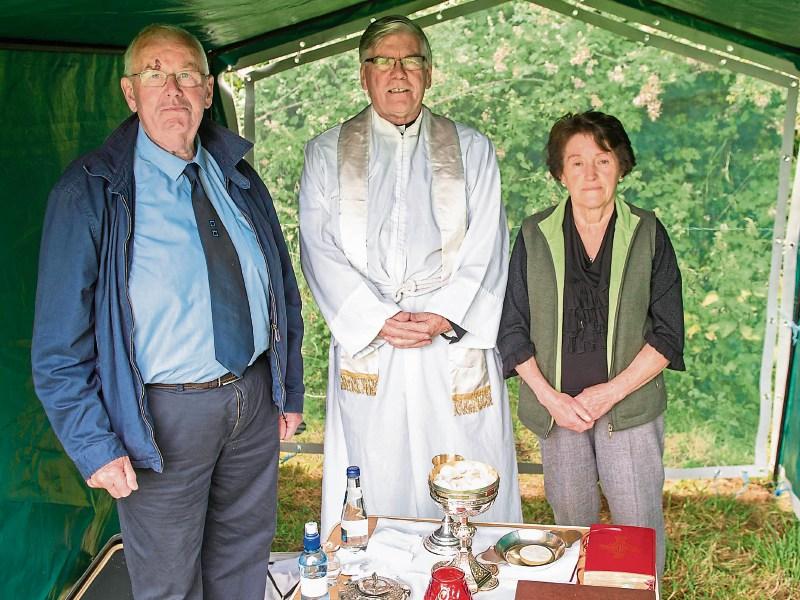 Canon Tom Breen P.P., assisted by Mary Connors and Gus Fitzgerald, celebrated Mass and gave a short talk on the unknown history of Templemartin Church and remembered all the babies, unbaptised and maybe baptised, that were been buried in the ruins of the old church. It was a common practise at that time for families to bury un-baptised children in the ruins of old unused churches as they weren’t allowed to be buried in ‘consecrated grounds’.

Parents travelled secretly by night and chose a spot inside local church ruins for such burials. Now that more decency and common sense prevails, it is no longer used since the late Canon Christopher Lee’s time as Parish Priest in Fethard.

Following Mass many interesting points were discussed as to the origins of Templemartin also known as Teampall Mhairtín (St. Martin’s Church) and the name, ‘Jesuit’s Walk’. Although it was agreed that the Jesuit Order of priests, founded in 1534, were never situated in Fethard, it was a puzzle as to why the road is known or called Jesuit’s Walk.

Michael O’Donnell, in his definitive book on the history of Fethard, suggests that there may have been an earlier settlement in the Templemartin area and that such a settlement about the old church may date from no earlier than the first half on the 1100s.

In September 1840, John O’Donovan, surveying St. Martin’s Church for the ‘Antiquities of the County of Tipperary’ collected during the progress of the Ordnance Survey in 1840, records the following information on the ruins.

“At the distance of about twenty perches from the town wall on the south side and in the Townland of Garryinch there is a small old church in ruins called Templemartin (Teampull Martain) i.e., St. Martin's Church. Its south wall is nearly destroyed but the others are tolerably perfect. It is twenty-nine feet long and seventeen feet broad. Its north wall is three feet two inches in thickness and twelve feet in height and built of hammered limestone cemented with lime and sand mortar. It had three windows, one on the north wall, another on the west gable a third on the east but they are all now disfigured. There is no burial ground attached to this little Church.”

Michael O’Donnell also records that, between 1708 and 1703 the road leading from Templemartin to Clonmel was recorded as being in need of repair, which would suggest that the only road to Clonmel was over Watergate bridge, through Templemartin and along the east side of Market Hill. The road from Madam’s Bridge would have let to Cashel.

Time may uncover the many mysteries that surround Templemartin and the many happy souls that its un-consecrated stonewalls embrace. For now we can only pray for guidance.